Several weeks ago, a pair of blue jays built a nest in the birch tree close to the north side of our house. The twig nest with its messy lived in look is well situated on a branch growing from the south side of a good sized limb. Smart bird. The location protects the nest from the north wind and weather. 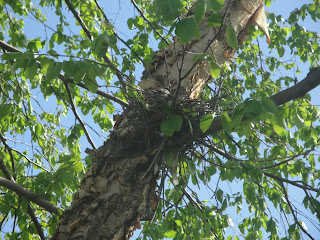 After mama blue jay began sitting on the nest, we hired an arborist to remove the large silver maple tree from our backyard. The maple split because of carpenter ant damage and we were afraid it would fall on the house. We also asked the arborist to trim the birch because it was hanging all over the neighbor's drive and our roof. I requested the branch with the nest be left on the tree. By late afternoon, our gutters were clean, the maple was a pile of sawdust, the birch had fewer branches, and the female was back on her nest, albeit slightly more exposed to the weather.

Later in the week, smaller than golf ball sized hail fell and I wondered if the bird would suffer a concussion. She survived. On Thursday and Friday, glorious spring thunderstorms with wind and heavy rain rumbled through the area. This morning the male and female are checking the eggs. He flies in, she moves to one side, and they peer into the nest. Then he flies off and she nestles back down on top of her brood. I wonder if the clutch is hatching. I can't see or hear them yet.

In other news, a religious fanatic has predicted the Rapture will begin today. More rain and thunderstorms are forecast for this evening. As I write, the blue sky is dotted with cumulus clouds. Rain has washed the streets clean and filled the birdbath. I'm taking my cue from Mama blue jay. The world, flawed but refreshed by rain, will continue to turn.
Posted by Jane at 9:38 AM No comments:

More than choices of pattern, fabric, and color, quilts tell stories which mark time and place in which they were made. In July 1999, I began a replica of a the Hovering Hawks and Red Peonies Quilt documented in Treasures in the Trunk: Quilts of the Oregon Trail. (Cross, 1993) The quiltmaker, Sarah Ann Hazelton Gilfrey traveled with her parents from Missouri to Oregon by wagon when she was 16 years old. She made the quilt in 1865 after her family arrived in Oregon. I began my quilt simply because I admired the original piece. Choosing reproduction prints and colors similar to Sarah's, I machine pieced two blocks and set the quilt aside. 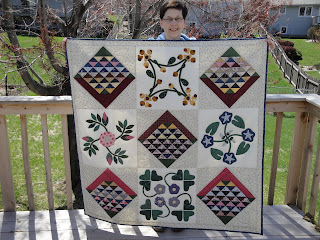 In 2001, after Mom was diagnosed with cancer, I often drove to see her. On one trip, I noticed a pair of red tailed hawks near a clump of cedar trees. I began telling her about the hawks. Each visit, she asked about them. The conversation became part of our visits and gave us something to talk about besides her illness. After her death in 2002, I finished piecing the blocks and bought the quilt pattern book, "Prairie Wildflowers," by Barbara Bracken. The following year I decided to applique the bittersweet vine, morning glory, wild rose, and wood sorrel patterns from the book in my quilt. I chose the bittersweet block because Mom loved the bright autumn vine with its orange berry. Over the next five years, I worked sporadically on the applique blocks and eventually sewed the top together.

When Dad's health began to fail in 2008, I drove to visit him. Through two years, I watched the autumn corn stubble, winter sunsets, and wildflowers blooming in the ditches. Weather permitting, I stopped to get out of the car and examine wildflowers along the road. At the nursing home, my sister and I often wheeled Dad into a courtyard where we talked about the flowers and shrubs in the garden. During the summer of 2009, I marked the quilting design on the top and basted the quilt layers together. Dad passed away in October 2010.

In January 2011, I hand quilted the piece and thought about my parents. Although my mother had a quiet strength, I never would have associated her gentle nature with fierce red tail hawks. Nor could I have predicted my brusque, strong willed father and I would have talked about flowers. Vastly different, red tail hawks and wildflowers on the quilt and Nebraska prairie share common ground the way my parents and I found common conversations at the end of their lives. In a way I never imagined, this quilt spun a story which recorded the common ground in a rite of passage. The passage was both theirs and mine.

Cross, Mary B. Treasures in the Trunk: Quilts of the Oregon Trail. Nashville: Rutledge Hill Press, 1993.