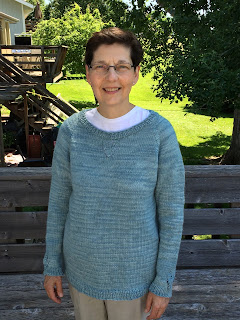 In April and May, I knit the Aggie Sweater. This sweater was knit in the round from the top down. The lace panel in the back kept the project interesting. After knitting the body, I picked up the sleeve stitches at the underarm and knit them down to the wrist. In order to have sleeves that fit my arms, I shortened them by two inches. Decreasing the length meant changing the rate of decreased stitches in order to have the correct width at the wrist. I did some math, took a deep breath, and began the first sleeve. Each time I decreased, I clipped a stitch marker into the stitches, leaving a visual record of the decreases. Between my notes and all the stitch markers on the first sleeve I was able to knit a second matching sleeve. I added the lace motif at the wrist.

Over the years, I have tried a variety of ways to knit two matching sections in a garment. Most often I used sticky notes. I wrote down row numbers or made tick marks to record increases, decreases, or rows between cables. However now and then I'd be chatting or thinking of something else and then wonder if I had really written down a number or made a mark. Of course, sticky notes on knitting patterns get lost. I've often wondered if anyone found the notes with my cryptic knitting code and whether they puzzled over what they had stumbled upon. Perhaps others aren't so interested in the little pieces of found paper. I also tried substituting a small notepad for the sticky note but made the same recording errors. Now I simply count rows of knitting which works well when it involves only a few rows. 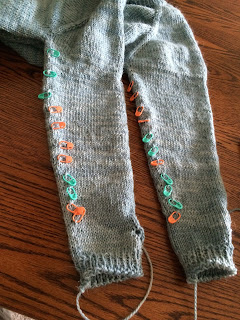 In between the first and second sleeve of this sweater, I had to purchase more stitch markers but I am always happy to support the local shops. Stitch markers seem to have a life of their own. I've found them on the floor of the car, in my pockets, in the bottom of knitting bags, inside books on the end table, under the couch, and in cushions. Some day soon I'll take the cushions off the couch and retrieve a few of them.

Several years ago, I bought this yarn to knit a garter stitch cardigan. After knitting most of the sweater body, I ripped it out because I didn't think the garment would hold its shape. Usually I just wind the yarn into a ball as I rip out a project. This time I skeined it up so I could wash and hang it to dry. The weight of the wet yarn relaxed the kinkiness made by  previous stitches. After it had dried, I wound it into balls. I did this all without a ball winder. I was able to reuse some lovely yarn and may have solved the matching parts dilemma. Aren't low tech solutions great? Now I have a Christmas Quilt top to finish. I am also working on a shawl and some socks. Sooner or later the rain will stop. As summer warms up, I won't want a lap full of sweater yarn. 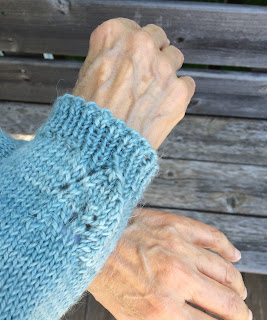