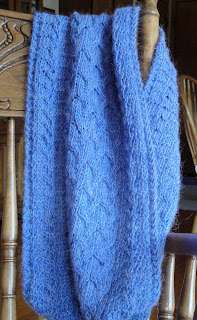 I've finished my version of the  Deephaven Cowl and mismatched mittens from Prairie Silk Yarn by Brown Sheep Company. I modified the cowl pattern so both edges are the same. Working late into several evenings while listening to an audio book, I lost track of rows knitted on the second mitten. Although I tried three times, I made mismatched mittens. The thumb construction, made by knitting a piece of waste yarn into the hand which are later unraveled and picked up to make the thumb, left holes which I cinched up with needle and yarn. This may or may not be due to the pattern design. Still, I felt like my workmanship on the mittens was inferior. I planned to wear both pieces next winter and then the temperature dropped and snow fell.

After trying on the mittens, I took them off and looked at the way my thumb grows from the top of my wrist.  The curve of my hand tells me a gusset made by increasing stitches just above the cuff makes more sense than knitting the thumb from an opening created by knitting stitches with waste yarn. I think the mitten would fit better and it wouldn't pull the cable sideways. Many mitten patterns use the waste yarn method so adjusting the position of  thumb stitches might improve the fit. The cable design in this pattern is the same on both mittens. Since I prefer cables to mirror each other, I'll pay more attention to cable twists in the future. However the mittens are serviceable and warm and there are no knitting police, I declared the mittens finished and counted them as a lesson learned. 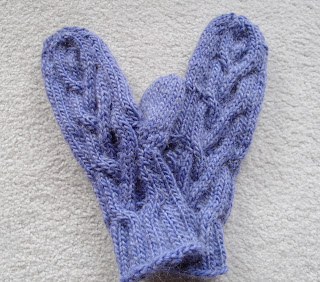 Life is full of irony, including spring weather and knitting. While the cowl pattern, was designed to be asymmetrical, I modified the pattern to make it symmetrical. The mittens were intended to be symmetrical but due to my errors ended up asymmetrical. For now, this yarn and I are finished. The two leftover skeins are in the basket of yarn scraps waiting for another day. Perhaps because I went to a funeral last week, life seems too short to reknit a mitten four times.  Even though the daffodils are drooping after April cold and snow, the rhubarb is up. I have a baby sweater that needs buttons, and a lovely garter stitch shawl on the needles.  Forward into Spring!
Posted by Jane at 9:40 AM No comments: