Now it is November 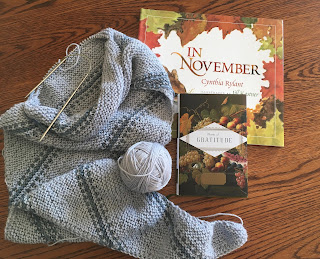 Now it is November. Late afternoon sunlight from the west reflects into gray clouds giving the sky a hint of periwinkle. Most leaves have fallen but those remaining look like burnished copper against the bright gray sky. On Monday, my husband and I celebrated our 40th wedding anniversary with a quiet dinner out. Yesterday afternoon we took a walk in the sharp north wind. The cold, bright, windy weather felt like November, not quite winter, but rather like the day we married. We are grateful for reasonably good health and each other. We also agree that life passes quickly.

I have an anthology of poems on my coffee table called Poems of Gratitude. I have been reading a few each day. Some like Mary Oliver's "Wild Geese" are very familiar, others are new to me. The small volumne sits on top of a beautifully illustrated children's book, In November, written by Cynthia Rylant and illustrated by Jill Kastner. Just maybe I can convince my grandsons to listen to this thoughtful book about the season.

The Contrail Shawl grows with each peaceful row of garter stitch. On our April trip East, I bought two skeins of light gray yarn because I liked the fiber and the color. They were my souvenir from Webs. At home, I decided to order a skein in a darker shade and then tucked all of them away for another day. When I chose this pattern for this yarn, I wanted to knit it as written. To do that I needed a second skein of the darker color. I sent an email to Webs and could hardly believe they still had a skein of the same dye lot. As always, I am grateful for customer service in yarn stores.

Now it is November, a time for drawing in, making afternoon tea, pulling loved ones close, and giving thanks. I am grateful for you, the readers of this blog, many dear friends, and family. I am thankful for many other things including dinner in the evening and a warm home on a November day. Tomorrow we will join my sister and her family for a bountiful Thanksgiving dinner. I hope you have a warm wonderful holiday. Happy Thanksgiving. 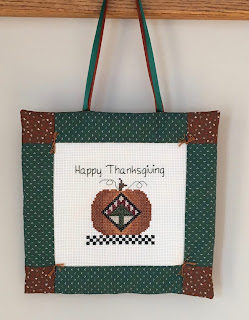 Linking up with Kat for reading and knitting on the Wednesday before Thanksgiving.
Posted by Jane at 10:33 AM 6 comments: 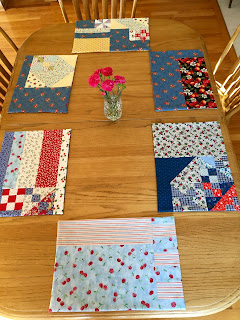 Last night I finished eight placemats. This project started with sorting and organizing the chest of drawers that holds quilt projects and fabric scraps. When I was teaching and my children were at home, I bought quite a few fat quarters. They weren't expensive and made me feel like I was quilting when I wasn't. Anyway, the cleaning project turned into a creative mess on my sewing table. Funny how that happens.

I pulled out quilt blocks that were never sewed into a quilt because they were the wrong color or size or just plain wonky. I retrieved a few fat quarters for the backing. As I sewed pieces and blocks into rectangles, I didn't worry about all points and corners matching. I just sliced and diced until the edges were straight and the mats were sort of the same size. In the past, I worked hard to piece accurately because I enjoyed precision. On this project, I cut and sewed to my heart's content and the randomness was freeing. Really, I think I need to break the quilting rules more often. 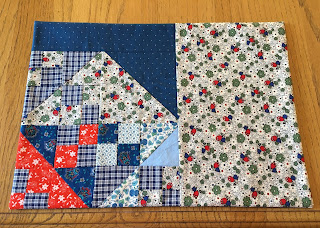 I finished two placemats before a cataract obscured my vision. On one of those mats, the backing is is wrong side out. I hadn't even noticed. I just left the mat as is, I doubt anyone at my house will turn over a placemat to examine the back side. I never would have settled for such imperfection in my younger quilting days. Another rule tossed aside.

This week I sewed backs to the fronts before hand stitching up the small opening left for turning the pieces right side out. I fused sturdy interfacing to the fronts hoping not to need any machine quilting. The placemats would hold together better if I machined quilted along a few seams. Who knows I may break another rule and leave them as they are now.

Scrappy means made of scraps - bits and pieces. It also means being fiesty or having a determined spirit. Hmm, if the scrap fits, maybe I should wear it.

Linking up with Kat's Unravelers - not ravelers as I wrote last week. I continue to savor Eleanor Roosevelt's short pieces in My Day.  If ever there was a woman with a determined spirit, she was one. Last night I kitchenered the Shallows Cowl together. This project is that perfect match between yarn and pattern. While knitting, I listened to How The Light Gets In by Louise Penny. 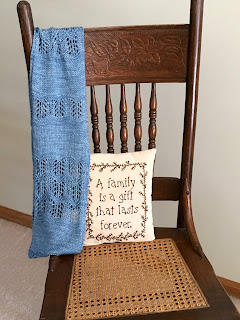 Will Inspector Gamache and his friends succeed in solving the intrigue going on in the Quebec police force? I suspect it might take another book but won't know for sure until I listen to the end. I do love that quote by Leonard Cohen, "There is a crack in everything. That's how the light gets in."  I'm enjoying both books. 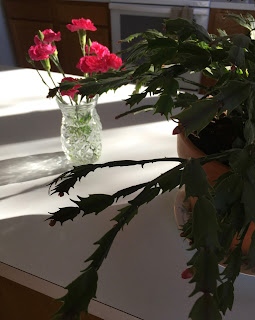 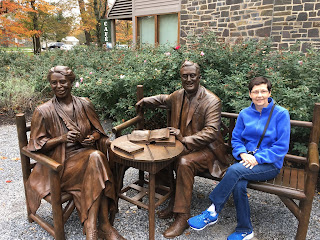 On our recent trip East, we toured the Roosevelt homes and FDR Presidential Library Museum in Hyde Park, New York. The Hudson River Valley was dressed in rich autumn colors. The park rangers were friendly and knowledgeable. I felt right at home with the park ranger/retired child care provider who drove the tram to Eleanor Roosevelt's home, Val-Kill. Originally the structure housed Val-Kill Industries, a wood working and furniture making business she and two other women created to teach skills and provide work during the Depression. Some historians think Val-Kill was a model for FDR's New Deal programs. Later it became Eleanor's home. She had never been comfortable in the large Roosevelt home run by her mother-in-law, Sara. So she created this more modest place with relaxed comfortable furnishings in cozy spaces. Here she wrote, entertained family, friends, as well as the young John F. Kennedy. She also held picnics for local children from disadvantaged circumstances. 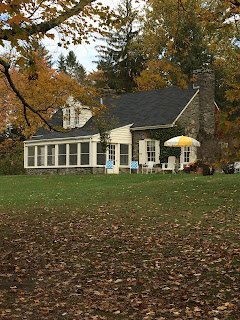 Just before traveling, I read Eleanor and Hick. The thoughtful well written history describes the public and private lives of Roosevelt and her friend, Lorena Hickock. Roosevelt was an advocate for peace, human rights, civil rights, and children's welfare. When a reporter asked her what America should do about racism, she replied, "we should face it." In 1939 she resigned her membership in D.A.R. because the group refused to let African American Marion Anderson sing in Constitution Hall. Then she arranged a concert for the contralto with a gorgeous voice at the Lincoln Memorial in Washington, D.C. She advocated for people living in poverty and stated that the function of government is to make life better for people. Truman appointed her as the U.S. delegate to the United Nations. She was an important member of the commission that wrote the Universal Declaration of Human Rights, a document adopted by the United Nations. She traveled widely until just before her death in 1962. At times I wonder what else she could have done had she lived slightly later. However she used her position and resources to accomplish a great deal. Perhaps she lived in the time that was right for her.

Eleanor was also a prolific writer, publishing numerous articles and books. I am reading My Day, a compilation of syndicated newspaper columns she wrote from 1935 - 1962. The chatty columns range from an account of dinner indoors on a winter evening to social and political issues she wanted to present to her readers. For many years, she wrote this column six days a week. And she was a knitter. In one column she wrote about the progress made on a sweater while "sitting around in a hospital." Her son had just had four wisdom teeth pulled. Several photos and videos show Mrs. Roosevelt knitting while chatting with her husband or on a plane. 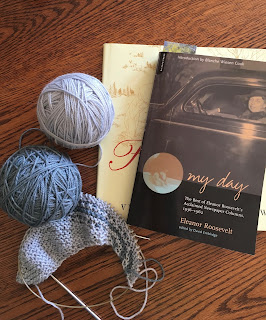 As I knit I continue to think about Eleanor. My mother who became a nurse just after WW2, admired and read about Eleanor Roosevelt. Now I wish I had asked her more about those books. I am sure she admired Eleanor's indominable spirit as I do.  This week I finished the blue cowls. They need to be blocked and tucked away into the gift basket. Last night I cast on a shawl. I purchased the yarn last April on our trip to the East Coast. I have one more skein of sock yarn from last October's trip to Fort Worth. We hope next year brings more traveling to see our children. Until then, I am enjoying the autumn leaves. They are falling today after last night's heavy frost.

Linking, I hope, with Kat's Unravelers. What are you knitting and reading? 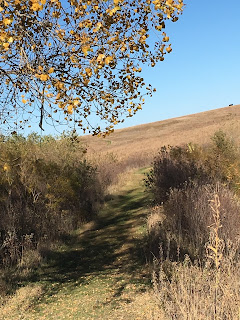 I am most at home on the prairie under an endless sky. Two weeks ago, I walked among the tall grasses to enjoy the last greens of the season. While there are two or three benches on Spring Creek Prairie, I prefer to sit on the ground, eye level with the native plants. By late October the insects are mostly gone. I saw one or two sluggish grasshoppers. The wind rattled dry seed pods as it blew through the grass and over the land. 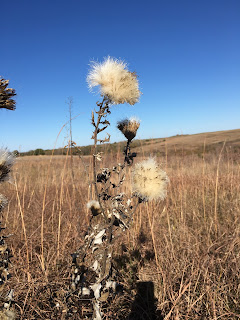 I saw a few stems of red coral berry and a little bittersweet near a draw. Just before leaving, I watched a great blue heron fish the pond. That evening I wound up a skein of sock yarn and packed my bag for the East Coast. 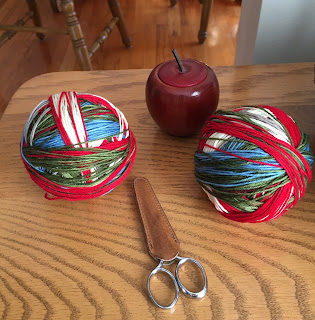 Since our children and their families live in Texas and Connecticut, we travel in their directions. Recently my husband fished with our son and grandson on the Texas Oklahoma border. This time the two of us flew into Hartford, CT. and drove into the Hudson River Valley before visiting family. The drive across the north central and western Connecticut into New York State was an autumn treat. We toured the FDR Library and the Roosevelt homes in Hyde Park. Although the New York Sheep and Wool Festival was the previous weekend, we had lunch in Rhinebeck, NY.  More about Hyde Park in another post. 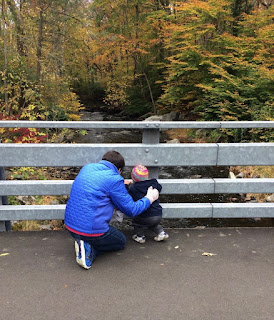 We had a grand visit with our family. We celebrated Halloween, read books, and walked around the Point with three little boys. We walked Emmett to school and watched him in the school Halloween parade. One morning I read to Micah's preschool class. Another day my daughter took Lance and I to the beach to see the sun rise over Long Island Sound. The last morning, she put the youngest in a backpack and we went for a walk in a wooded area. The Connecticut woods were full of subtle autumn sights. 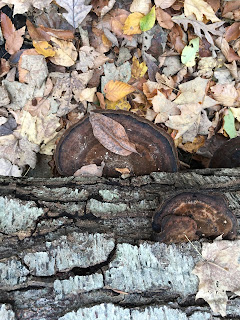 While it is hard to say "bye-soon," we are grateful for the time together and a safe trip. After all it is November on the prairie and I came home to my own tea cup. 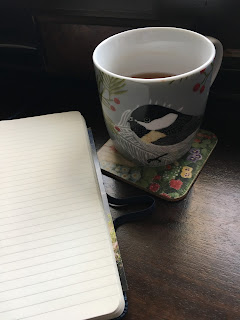