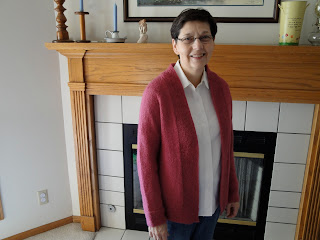 In mid-July 2012, I began looking for a knitting project to soothe my way through the back to school routine and mother of the groom moments. Aaron was being married three weeks after my fall semester began.  After rummaging through storage bins, I decided to make a sweater from a mohair/wool yarn I had purchased ten years ago. "Tiur" by Dale of Norway is a soft, warm, sturdy yarn but I wondered why I had chosen the bright color. Maybe I had been thinking of Gram. She loved pink in all shades. She painted her nails, the kitchen cupboards, bathroom walls, and woodwork pink. She also knit several pink sweaters.  Even though I had reservations about knitting the yarn, she would have loved the color and the sweater.

As I worked the test swatch, I remembered the day I bought the yarn. Lance and I had traveled to New England to celebrate our 25th wedding anniversary. That rainy, damp October day, we took a break from looking at fall foliage to have lunch in Laconia, New Hampshire.  After eating beside a fireplace in a cozy sandwich shop, Lance went out to the car with a book and I headed into the small yarn shop. The owner knitted behind the counter as I examined yarn and labels. When I finally made my selection, she gave me good advice on yardage for a cardigan.

Ten years later while browsing Ravelry, I discovered the Miriam cardigan published by Quince and Company.  Located in Maine, the independent company sells patterns created by company owners as well as independent designers. They spin yarn from American wool and fibers grown in an earth friendly manner. The pattern and the yarn were a good match.

As I knit the body of the sweater in July and into August, the knitting collected my anxious thoughts and good wishes for my son's wedding. The rehearsal dinner, wedding, and reception went well. Aaron and Jacque celebrated in their unique way with friends and family. During the reception, I danced with my son to Louis Armstrong's, "What a Wonderful World."

As August melted into September and October, I knit the sleeves of the sweater. After knitting six inches I knew they would be too wide so I ripped them out. I cast on fewer stitches but increased the sleeve width at the rate called for in the pattern. Late October, I blocked the sweater and held my breath while sewing up the sleeve seams. I worried they might be too tight around the upper arm but was pleased to find the sweater fit well. Before knitting the front band, I washed and blocked the sweater.

Three days ahead of our 35th wedding anniversary,  I picked up over 200 stitches to knit the front band onto the cardigan. On November 20th we went out to our favorite local restaurant to mark the anniversary. Wearing the sweater that evening would have made a tidy ending to this story.  However, I had no desire to knit furiously to meet a self-imposed deadline. I did knit one row on the evening of the 20th so the sweater would include a remembrance of our 35th anniversary.  Four days later at the end of the Thanksgiving weekend, I knit the last stitches of the sweater.  Now, I look forward to wearing the sweater and recalling our anniversaries and my wedding dance with Aaron.