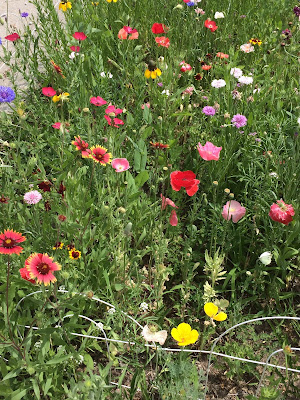 As July winds down, I'd like to slow the passage of this summer. We have stayed close to home, enjoying the garden, reading, knitting, sewing, and spending time with our three grandsons. Here are a few highlights from July:

My book group met at A Novel Idea, a local used bookstore with a good inventory of fiction and nonfiction. We spent a pleasant few hours browsing books, enjoying cold drinks, and chatting with two bookstore employees. Both are avid readers so it was fun to compare notes. Part of the charm of this bookstore is finding the unexpected. I happened onto The Last Gift of Time: Life Beyond Sixty, a book of essays by Carolyn Heilbrun. The author was a professor at Columbia University during a time when women struggled to be accepted in academia. I particularly enjoyed "Unmet Friends," an essay about the kinship she felt with poet Maxine Kumin. Since the two women never met, Heilbrun's sense of kinship with Kumin allowed her to explore the relationship between reader and writer. Some essays are dated but they remind me of the strides women have made in my lifetime. Helibrun lived about the same time as my mother which may have been another reason I enjoyed reading her work. 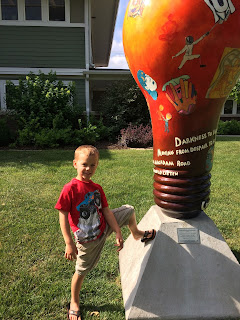 Now and then, our four-year old grandson and I take a field trip around town. Late Spring, Lincoln hosted a public art project to celebrate the 25th anniversary of Lighthouse, a program that benefits middle and high school students during after school hours. Large lightbulbs have been decorated by community artists and installed around town. E. and I are driving around to look at them. We have fun locating them on a city map, planning a route, and then finding them. Now when either of us says, "I have an idea . . ." we joke that a lightbulb has gone on. I will remember this"lightbulb summer" for a long time. I hope he does too. 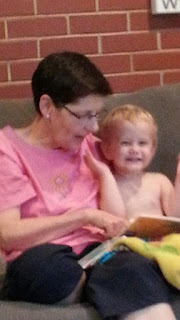 His younger brother, soon to be two, doesn't have the patience for lightbulbs but he loves to read. Currently truck books are his favorite. This sweet little guy will pick out a book, pat the couch and say, "sit down, read" meaning he wants the adult to sit down so he can snuggle up with his favorite books. I am grateful to the creator of "Little Blue Truck" as it gives us lots of time together.

We had a surprise visit from our Texas daughter-in-law and grandson. We took A. and E. out to A's favorite breakfast spot for waffles and hot chocolate with sprinkles and whipped cream.

Early this month, my husband and I attended the funeral of an elderly gentleman. He lived a good long life, worked hard, and loved his family. He was ill and his death was not expected. At his request, pizza and salad were served after the service. Having grown up during the Depression, I doubt he complained of the customary cold cut/macaroni and jello salad lunches often served at funerals. Still his request for pizza brought smiles to the faces of his family and friends. Later in the day I stopped at a local fabric store to buy some buttons for a baby sweater. The little lime green sweater seemed to call for ladybug buttons. I found some just the right size.  As is my custom, I parked a distance from the store in order to walk extra steps. Not too far from my car was a sweet patch of wildflowers. I had never seen them before and they were certainly prettier than cedar bark mulch under traditional landscaping plants. 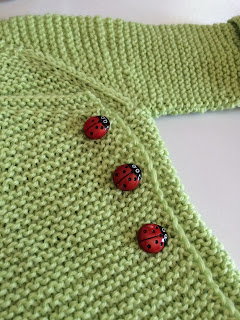 These summer days filled with ordinary moments have been quite wonderful.  More please.

Tidying Up: A Clean Knitting Slate 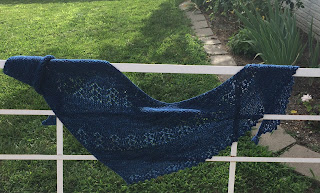 I have been in a "tidying up" mood lately. Many folks are inspired to do this in January. When I taught school, summer was the time I cleaned kitchen cupboards and closets so I associate hot, humid weather with more extensive sorting and straightening of my belongings. Last week I decided to get my knitting projects in order.

In June, I finished this Nurmilintu shawl. The name of the shawl comes from a line in a Finnish lullaby that translates to "Sleep, sleep my little bird." Isn't that sweet? I believe the designer is Finnish. My dear sister gave me the Collinette Jitterbug yarn. I enjoyed the pattern and the yarn. I think the shape of the shawl makes it very wearable and I have never met a shade of blue that I didn't like. I finished the knitting three weeks or so before I washed, blocked, photographed, and posted the project on Ravelry. 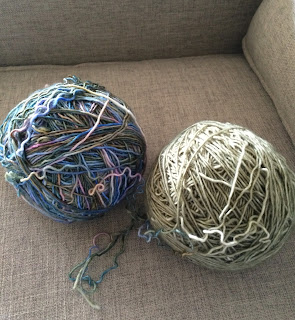 Since Spring, I have been knitting in fits and starts on a Leaf Press Shawl. The pattern is well written and easy to follow. Both yarn colors are lovely but the variegated yarn seemed to get lost in the stripes. I was also tired of twisting and untwisting two balls of yarn at the color change. I might have persevered if I had liked the finished knitting but I didn't. The project spent a lot of time tucked away in a closet. After trying again to knit a few rows while listening to Garrison Keillor's Prairie Home Companion, I decided both skeins could be used to better advantage so I ripped out the shawl. As Garrison's entertaining voice went on, I ripped out another project that had been languishing in the yarn bins for quite some time. Many years ago, I ordered some pink cotton yarn to make a shell. I have tried three times to make something from that yarn and have been unsuccessful. The color is a little sickly sweet. I ripped out the last attempt and decided the yarn might make a baby sweater or wash cloths. Ripping out projects doesn't bother me. I think of it as getting more value (money and time) from the yarn.

I also blocked a Rocky Mountains Cowl I finished earlier in the week. Although the pattern calls for a worsted or chunky weight yarn, I used a sport weight yarn and added a few repeats of the pattern to get the size I wanted. 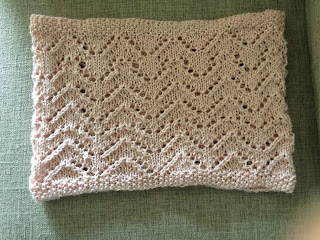 Then I finished up a washcloth that had been riding around in the car with me for months. Last night I knitted the heel and gusset on the second top down Evergreen Sock which is my only project on the needles. I hardly recognize my knitting self. Sometimes though, a clean knitting slate is a good idea. Now, if I could only transfer this tidying up frame of mind to the storage area in our basement. A clean slate down there is a good but impossible idea. Still, a few trips to the Goodwill would help. 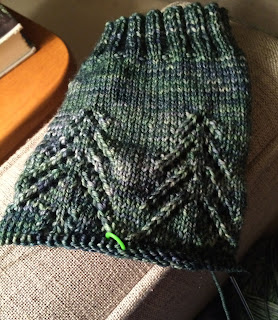 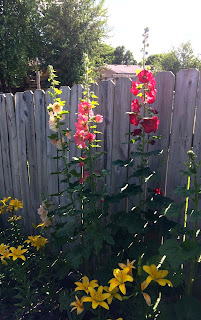 Abundant rain continues to fall in our area. On dry days, I duck out to weed the small vegetable garden, the perennial flower beds, and herb garden. The tomato and cucumber vines look healthy. The cucumber vine has blossoms and the cherry tomato plant begins to bear green fruit. The oregano is exploding with long branches and larger leaves while the basil needs a little more sun. Hollyhocks I planted along the fence are blooming. Some years the hollyhock seeds have not germinated but this year they are doing well.

Several rainy afternoons, I searched through my handwork supplies and sewed project bags for my knitting. I purchased this pattern. It is well written and easy to follow. The designer offers a free tutorial for a small bag suitable for a sock or mitten project. I wanted a few that were larger so I purchased the pattern. I used the red geranium fabric for the small bag (free tutorial.) The purchased pattern gives instructions for eight sizes, including a recipe for making a custom sized bag. The two slightly larger bags are made from leftover quilting fabrics and old linens. Using the linens is not an original idea. Browse Etsy and you will find all kinds of uses, including bags and purses, for new and vintage embroidery. 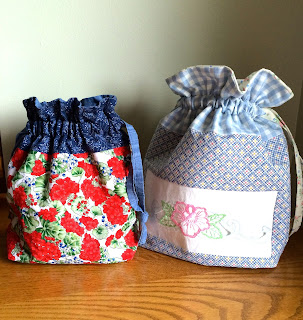 Over the years I have inherited and purchased vintage linens trimmed with hand embroidery. I use them as dresser scarves and small tablecloths until they wear out. I keep a few stained worn pieces because I don't want to throw away the embroidery work. Once a long time ago, a family member sold my Grandmother's Depression Era Double Wedding Ring quilt to a second hand shop. She didn't mean any harm nor did she realize anyone in the family (like me) would liked to have kept the quilt. I have always wondered whether the piece found a good home, was repurposed into other projects, or was used to cover old furniture in a barn.

Because of that experience, I either use old textiles or find them a good home. When I saw these pieces among my supplies, I decided to sew them into the exterior of the bags. The pink flower may have come from one of my Grandmother's dresser scarves. The embroidered bluebird piece is one I picked up at a second hand store. I fused the embroidery to white cotton fabric so it would be more stable. The lined bags have tidy insides and the drawstring closure doesn't snag yarn. I also didn't have to purchase or install a zipper. The embroidered flower is more proportional than the bluebirds but even so I like the way the bags turned out. They were good entertainment on a rainy day and will be useful for knitting projects. I enjoy using bags that carry the work of another woman's needle. 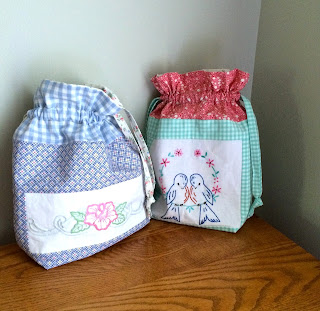