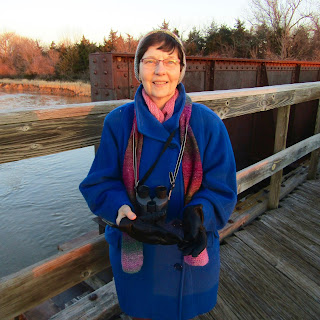 Welcome to Spring in Nebraska. Chilly rain one day and sunshine the next. Earlier this morning, the sky was bright and blue and now it has clouded over. Cooler weather and precipitation, dare I mention a few snowflakes, are forecast for tomorrow.

Yesterday my husband and I took advantage of a sunny day to drive out to the Platte River Valley in central Nebraska to view the sandhill crane migration. The Platte, a braided river that meanders around sandbars and shifting islands carries snow melt from the Rocky Mountains to the Missouri River. The short stretch near Kearney hosts the annual stopover of these birds. Between mid-March and early April, between 400,000 to 500,000 cranes feed in nearby fields and settle on the river at night. The average wingspan of an adult is between 5.5 to 7.5 feet. 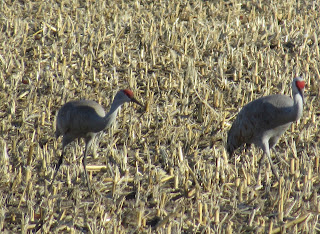 We arrived mid afternoon, found a safe place to park on a county road, and watched the birds. Now and then they spread their long wings to move about but generally seemed content feeding on leftover corn under a warm sun. After an early dinner in town, we drove back to the State Recreation Area and walked out on a pedestrian bridge that spans the river. 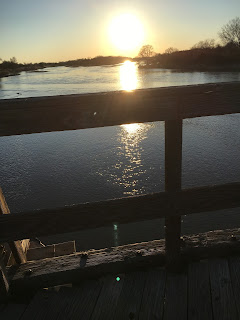 Standing on that bridge at sunset is magic. During the day, the birds call softly to each other in the fields but as the sun falls lower in the sky they call more frequently. Before the birds are visible from the bridge, their swelling chorus fill the air. Soon a few lone birds and then small groups begin to fly toward the river. And then ribbons of birds appear overhead, flying up and down the river in search of safe place to rest. They don't land near the bridge because too many of us are standing there with cameras and binoculars. Even so, their ancient music is the beginning of Spring. 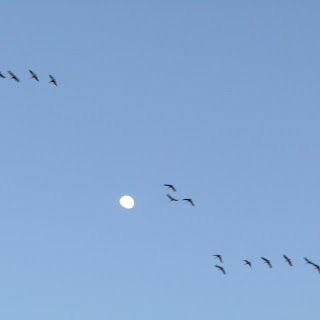 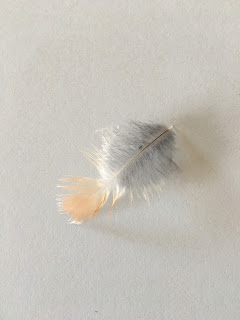 March is Women's History Month. I was in college (1969-1973) when my Mom discovered women's history. It was a heady time. She sent my sister and I subscriptions to Ms. Magazine. She was fascinated by the Suffragettes, especially those with ties to Nebraska and Iowa. I still have a news clipping I found in one of her books with a list of these women. She often recommended books written by women, some more widely known than others. She introduced me to Mari Sandoz, a Nebraska author. She gave me books published by small presses written by and about women in the west. Many of them remain on my bookshelf today. Mom was the best as a mother, friend, encourager, life-long learner, registered nurse, and much more.

Spring's arrival is slow. In the wee hours of the new season, a flurry of wet snow fell. The goldfinches sport the first hint of their brillant summer yellow. Daffodils in my yard are up about three inches and the iris spears are green. I poked the compost for just a whiff of rich soil. The sandhill cranes are feeding along the Platte River in Nebraska.

My knitting has turned to small simple projects. I have the proverbial pair of socks on the needles. On a recent gray day, I cast on fingerless mitts in River, my favorite color in this yarn. Tomorrow I see the ophthalmologist for a new glasses prescription. When the glasses arrive in seven to ten days, I will be able to read with ease. I am grateful the cataracts in both my eyes have been successfully removed and replaced with new lenses. Literally, the possibility exists for seeing the world through new eyes.

Joining Kat and others for Wednesdays Unraveled. 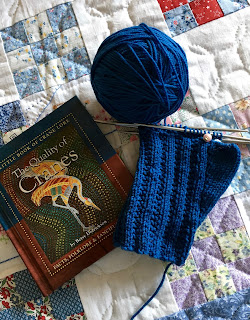 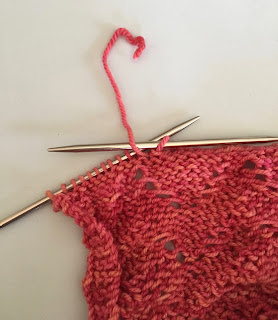 Yesterday we had a taste of Spring. The day was warm enough to walk in shirt sleeves and so I did. Earlier this week, we attended the funeral of an acquaintance who died suddenly. I decided grocery shopping could wait ninety minutes. At the edge of town, I walked on a trail and sat on a bench facing the sun. Later I carried my knitting to the deck. The sun was lower in the sky as the robins and finches sang to each other. I'm sure the dust continued to accumulate in the house but the warm day was too fine not to be outdoors.

On the deck, I bound off the Kindness Shawl. It was a well fought game of yarn chicken. I knew I might not have enough to finish the bind off but decided to try. I ran short so I cut the tails from the cast on and one other place where I had removed a knot in the skein. I used those two little pieces to finish. I confess I tied knots after pulling the ends to the back. That corner is not going to win any prizes but I did finish the shawl without tinking back two long rows. I think I won the game but a sudsy bath and blocking will tell the story. If the ends unravel, I will not. 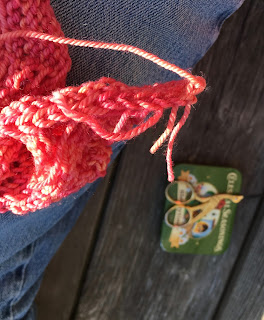 This shawl will be a donation or a gift.  I am not crazy about the tonal variations and color in this yarn. Both looked better to me in the skein than in the shawl. The yarn has a nice hand and the pattern is easy to follow. It just doesn't seem to be a good match for me. Perhaps someone else will enjoy it. The lesson here is not to persevere when a little voice in my head raises questions. How many times do I need to be reminded that not all projects need to be finished? The yarn would have made great socks.

Today the sky is partly cloudy and the day is not as warm. No matter, my Texas grandson and his mother are in town and we are meeting them for pizza this evening. That will be sunshine enough for this day.
Posted by Jane at 10:36 AM 6 comments: 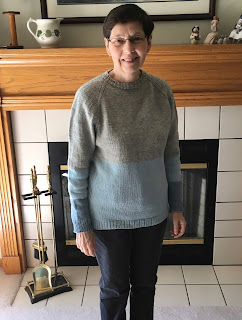 Welcome March, the month of windy mercurial weather, winter one day and spring the next. Today looks more like winter with the latest skiff of snow on the ground. The color block sweater is finished. I will enjoy wearing the sweater into the early Spring. Except for the cuffs, I used yarn leftover from two projects so my stash is a tad bit lighter. You know you are a knitter when you order yarn for a project that was supposed to be knit from leftover yarn. 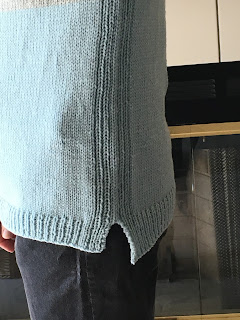 After we photographed the sweater, I looked down at my feet. You know you are a knitter when you wear out one of a pair of hand knit socks but save the other to wear with another sock missing its mate. The lavender sock has been in my drawer since last winter waiting for a mismatched mate. 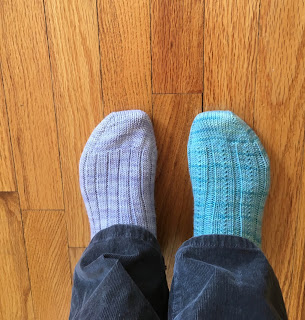 While the sweater dried, I knit on this shawl from another skein of yarn buried in the stash. It feels good to knit with yarn and patterns on hand. I picked the color to remind me of the spring flowers that will soon push up from the ground. 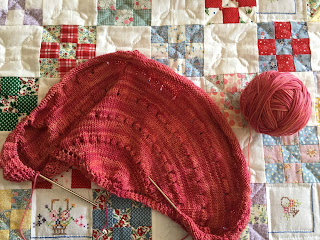 I am listening to Personal History by Katherine Graham. Graham became the publisher of The Washington Post after her husband's death. She experiences many privileges from being born to a wealthy parents. However she also experienced some anti-Semitism due to her Jewish heritage through her father. My Dad was a Circulation Manager of a newspaper and my brothers continue to work in the field so I am interested in the autobiography from the standpoint of newspaper history as well as the education and professional life of this strong woman.

I am reading The Readers of Broken Wheel Recommend, a light hearted, feel good literary romp set in a small town in Iowa. It is good company for recovery from cataract surgery late last week. This is my second eye to be repaired and the procedure went well. I plan to have new glasses in time for Spring travel.

Joining Kat and the Unravelers. What are you knitting and reading this week?