Last week I finished the September Morn sweater I have been knitting this winter. That is, I finished the ripping and re-knitting and finally knit the contrasting ribbing. Since my short neck gets lost in a large turtleneck, I knit a simple ribbed crew neck. Then I washed and gently blocked the sweater before weaving in ends. 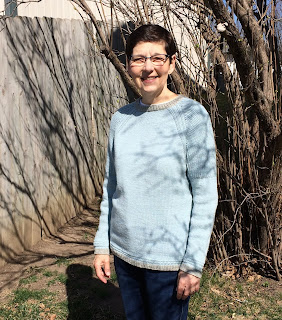 The sweater was hard to photograph, especially this time of year with little contrasting color in the landscape. Too much light washed out the color and too little made for a dark photo. The shadows in this photo remind me of an older image of my Grandfather. The photo was taken in 1919, just after he arrived home (a farm in south central Nebraska) after serving on the Western Front in France. When I look at it, I see a shadow on his face and wonder what he was thinking. His smile doesn't seem quite natural, perhaps a little tentative. I also wonder who took the photo and what the family was doing and saying in the yard under the pear and elm trees. Before spinning a story, I remind myself that sometimes shadows occur in photos. Perhaps he was just looking into sunlight on a May day. 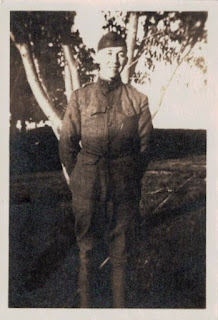 I can tell you what I was thinking when my husband helped me with the sweater photos. "Stick a fork in this sweater because this story has come to an end." The Chickadee yarn by Quince and Co. held up beautifully. I knit several skeins four times with no difference in the finished fabric. The wool, tightly spun and carefully processed, has as much memory as an old photo. I will wear this sweater/sweatshirt often because it is warm and cozy without being heavy. I prefer sport to worsted weight sweaters.

However, I am not casting on a stockinette sweater any time soon. Currently I am knitting the hand of a second mitten and a cowl. When I finish these smaller projects, I will tackle a Christmas stocking for little J.

Last Friday morning, he came to visit for a few hours. He is growing but still at the newborn stage when he melts into the chest of whoever is holding him. I can't think of a better way to spend a Friday morning. 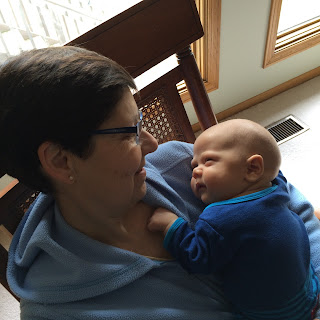 Thoughts From a February Morning 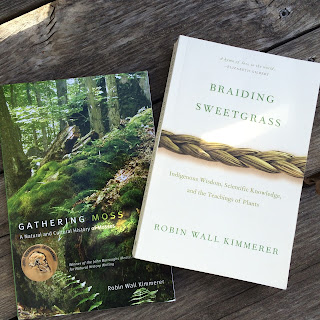 I recently read Braiding Sweetgrass by Robin Wall Kimmerer. Her writing was so beautiful I read her first book, Gathering Moss. Kimmerer's essays combine science, personal narrative, and Native American ways of knowing. She writes with a gentleness that includes curiosity, wonder, and respect. I hope she continues to write.

I was inspired by Kimmerer's work to write this poem.

On This February Morning

What if we believed in both/and instead of either/or?
What if we engaged in give and take instead of win or lose?
What if we discussed rather than debated?
What if we created conversation instead of conflict?
What if we used just enough, leaving the rest to the earth?
What if we cared for the soil, trees, creatures, grasses, stones, and water
the way they care for us?
What if?