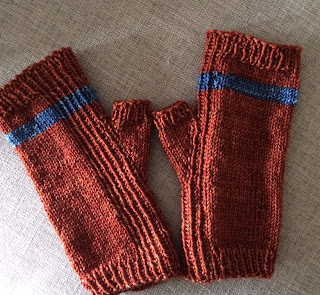 Last week I knit these mitts. About ten o'clock one evening, I finished the second thumb and wove in the ends on both mitts. Then I tried them on to admire them, the way we knitters do, only to discover the thumbs are differently placed in the ribbing. Rather disgusted with myself, I set them aside and went to bed with a book.

I knit these while listening to a Charles Todd mystery, A Pale Horse. I particularly liked the end of this story. Charles Todd is a mother/son team who have published two mystery series set in England and France during and shortly after World War One. One series features Bess Crawford, an English woman serving as a nurse during the war. The other longer series, that the above book is part of, is set in England after the war. The protagonist is Ian Rutledge, a Scotland yard detective, who served as an English officer in France. Rutledge suffered shell-shock during the war and carries his demons with him. I find both series well written with the right amount of plot, history, and descriptions of place and characters. While they are about murder, they do not contain gory details that keep me up at night. Occasionally I wish Rutledge could find a little peace but Todd's portrayal of shell shock is more authentic. I enjoy the mysteries so I was probably imagining the English countryside or listening for red herrings while drinking tea and knitting merrily away on the second mitt.

Many others have knit the Align Mitts successfully so the mistake is mine and not the fault of the designer. I did think to knit an inch cuff of ribbing to keep the stockinette portion from rolling up along the bottom edges. The mitts don't take much yarn and would be easy to size up or down. I like their tailored non-fussy look. I will probably knit them again as the pattern is well suited to leftover fingering weight yarn. Other yarns could be substituted and the stitch count changed. The designer made a few suggestions on how to do this on the pattern page. I used Entice Yarn by Hazel Knits that was leftover from the Shallows cowl. The yarn is lovely around the neck or to wear on the hands.

My first inclination was to rip out the second mitt and reknit it so the two would be a perfect match. Indeed, I think of ripping and re-knitting as getting more value and enjoyment from the yarn. I have ripped out sweaters because I knew they weren't going to fit. I have ripped out lace patterns in order to maintain the melodic rhythm of the stitch patterns. I stand by the idea that if, I don't like a mistake now, I won't like it ten stitches, ten rows, or ten inches of knitting later. I have fixed and fudged all kinds of mistakes.

Earlier this week I happened to have a conversation about perfection with an acquaintance. I didn't know the woman well enough to offer advice so I listened as she stated her home would never measure up to the newly built new homes of her friends. I countered with my thoughts on accepting less than perfection when celebrating the winter holidays. When I got home, I looked up the dictionary definition for perfect. My old hard copy of the American Heritage Dictionary listed eight definitions for the word used an adjective, two for usage as a noun, and several more about verb usage and verb tense. Only once did the dictionary define "perfect" as being without defect or blemish. Other notations in the list included the following: lacking nothing essential to the whole, completely suited for a purpose, excellent and delightful. More over, some of the word origin comes from a Latin participle meaning "to finish" or "to do."

I decided not to redo these mitts. They are very warm and comfortable. They fit well and are sturdily made. I wove the ends in with care and the cuff won't roll up out of my sleeve. And for heaven's sake, they are made of merino, cashmere, and nylon yarn that is perfectly delightful next to the skin.

Perhaps you will join me as I raise my knitting needles high and salute whole and delightful perfection! 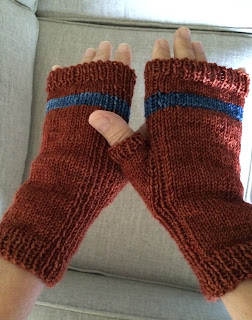 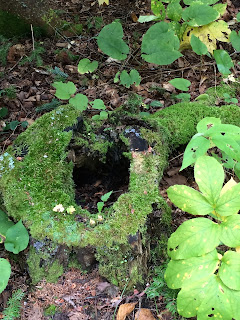 Recently my husband and I drove up the Minnesota shore of Lake Superior. I kept thinking of the line from The Teddy Bear's Picnic, "If you go out in the woods today, you are in for a big surprise." We didn't see any bears but we had several picnics and found other surprises in the north woods of Minnesota. Autumn is my favorite season and traveling early in the season only improves the scenery. The leaves on deciduous trees were starting to turn colors. I loved the cooler temps and crisp air. I took a fleece jacket and was pleased to wear it. 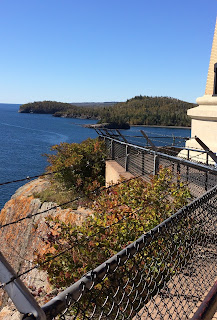 Previously, when we visited Duluth, I considered it to be a northern outpost. This time we continued up the shore to Grand Marais, Minnesota. The banner strung across the main street proudly proclaims, "The Best Small Town in America." I might agree. Grand Marais is home to a thriving community of artists. My favorite artist's studio, complete with beautifully illustrated children's books, was that of Betsy Bowen. We stayed at the MacArthur House, a lovely B and B, and ate delicious dinners in small local restaurants. There wasn't a chain restaurant in town. One day we drove up to Grand Portage National Monument and hiked a short distance to Pigeon River along the Canadian Border.  On the return trip down the shore, we toured Split Rock Lighthouse. We might visit this area again.

My husband likes to drive so I logged plenty of knitting miles. I finished the Shallows Cowl and cast on a sock in some wild self-striping yarn by Desert Vista Dyeworks. Duluth has a great little yarn shop called Yarn Harbor. I bought a skein of Three Irish Girls fingering weight yarn because it is dyed locally in Superior, Wisconsin. The color, Bayfront, is about the color of the lake on a clear autumn day. I am not sure whether it will become socks or a shawl. I do know the stitches will carry a hint of autumn days in the North Woods.

In the past few days, the leaves on the birch in my front yard have begun to change. I'm off to walk around the neighborhood and watch autumn arrive. I hope you find time to enjoy October. Happy Autumn. 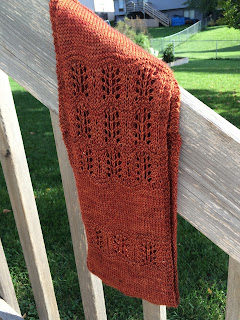