I spent a few hours this afternoon digging for black gold at the bottom of the compost pile. Two years ago, I unearthed a family of moles as I dug for compost. Although I try to appreciate all critters, moles are my least favorite. I'm sure they serve a purpose and they probably make better compost. I just find them rather unnerving. This time, I stood a long handled flat shovel nearby in case I needed to deposit baby moles into the second bin. 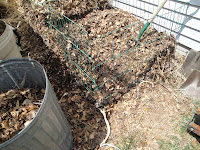 I began by shoveling the detritus of yard and garden clippings from one compost bin into two garbage cans. At the bottom of the bin I found five inches of rich black dirt which had accumulated over two years. As I forked, shoveled, dug, pushed a wheel barrow of the stuff up to my herb garden, and then dumped and hoed it into the ground, I found another reason to care for the environment. Mother Nature and I worked hard to produce soil. 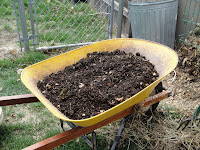 Although it is easier to buy dirt in a bag (and I should know because I've done it many times) I take great satisfaction in keeping leaves, grass, and kitchen scraps out of the landfill. I also decided a compost container with a drawer across the bottom might be a good investment.

Compost bin number one wasn't home to any moles. If they have taken up residence in the second bin, I'll try not to shriek.
Posted by Jane at 5:46 PM

Email ThisBlogThis!Share to TwitterShare to FacebookShare to Pinterest
Labels: compost