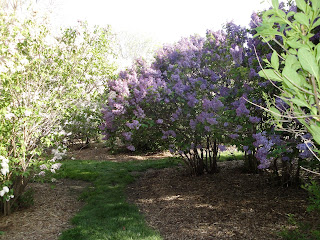 Last week, the lilacs in my yard began to bloom. I have three varieties and am considering adding a white lilac. While I drive to and from work appointments, I look for the hardy flowering bushes along backyard fences and alleys, near the curbs of busy streets, and in yards and gardens. Unfortunately, I can only imagine their scent while flying by in my car. Yesterday, my husband and I set aside Saturday chores to visit the Maxwell Arboretum Flack Lilac Collection on the south side of the CY Thompson Library. (Photo above)  We arrived around 6:00 p.m. along with four couples dressed for a high school prom. As I pushed my nose into fragrant blooms, proud parents took photos of their teenagers. The young men, looking slightly awkward in their tuxes and suits, reminded me of my grandfather when he was their age. 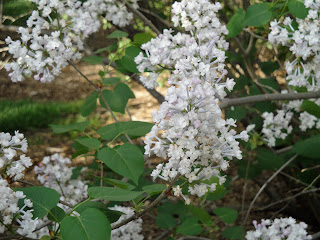 In 1917, my grandfather Dewey was eighteen years old and lived on a farm in central Nebraska with his widowed mother. Instead of the suit he might have preferred, he donned the uniform of a World War One doughboy. Dewey and an older brother volunteered for military service so another brother could stay home and farm. My granddad arrived in France in late May 1918. When my sister asked him about the war he replied, "We didn't think about making history, we just wanted to go home." Just after the armistice was signed, Dewey wrote his mother saying, "I hope to be home before the flowers bloom." However, shipping the American Expeditionary Forces back to the United States took some time. Dewey arrived home in mid May of 1919. I don't know whether or not he returned in time to see lilacs bloom that year but I do know my grandfather was very thankful to be home.

Although Dewey didn't become a farmer, he gardened most of his life. My grandparents had several large lilac bushes in their yard where my siblings and I often played. Once, when I was a first year teacher, my grandfather picked a large bouquet of lilacs, placed it in a plastic bucket of water in my car before I drove 2 1/2 hours back to Lincoln. Dewey has been gone for almost thirty years but the sight and scent of lilacs will always remind me of my gentle grandfather and a young man who went to war because he felt he had a responsibility to his family and country. 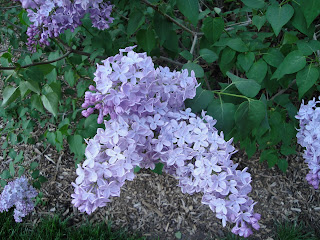