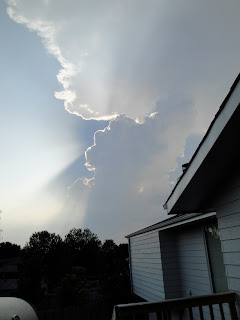 I regularly walk a route around my neighborhood, walking cul de sacs, up and down a hill, and then retracing some of the route to lengthen it to 2.75 miles. After late snows, plentiful rains, and crackling thunderstorms, my neighborhood is lush and green. This morning, storm clouds threatened rain so I shortened the route by walking some blocks in the reverse direction.

Walking the opposite direction, I caught a glimpse of a sweet backyard vegetable garden I'd never seen before. A row of lettuce and another of onions grew in front of tomato plants. A few yellow flowers lined a small fence designed to keep critters away from vegetables. In another yard, I saw a color combination in a planter that would translate into a colorful quilt. Yellow and lavender petunias with their green foliage cascaded from the planters fitted to a front porch railing. Usually I watch the southwestern sky for interesting colors but today I watched clouds clear from the eastern sky. While doing so, I noticed a large bird I dismissed as yet another common crow. As she circled the neighborhood, I saw thin long legs stretched out behind the large flapping wings which identified the bird as a Great Blue Heron.  I also remembered a morning in August when early haze and high humidity made spider webs, usually invisible, appear to hang like ragged lace all over the neighborhood. These observations and thoughts keep me walking. 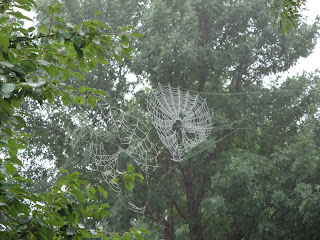 Truth and beauty are found in multiple perspectives. In addition, different perspectives create a richer notion of what I have in common with others. For example, my great grandmother loved to garden.  My aunt told me Charlotte had a beautiful garden until the day she died in August 1940. While I garden haphazardly, I prefer spending time with knitting and quilting. Below is the baby girl sweater which is ready for a new grandchild should it be a girl. (See previous posts for the little boy sweater.) Although my hobbies are different than those Charlotte enjoyed, the work of our hands creates beautiful and useful things for our families. 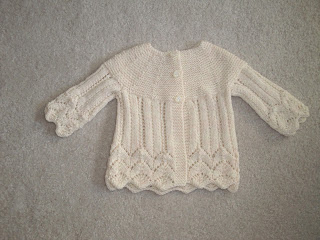 This summer I hope to finish my story about Great Grandmother Charlotte. When I began, I thought of her as a mother of two World War One soldiers. Then, while reading between the lines of my grandfather's letters from France, I began examining her life from other perspectives. I searched for information in family photos, old newspapers, land records, and history of central Nebraska. Differing perspectives helped me get acquainted with her as a woman of her time. I also hope I have crafted a story which comes closer to the truth about her ordinary days.
Posted by Jane at 10:08 AM