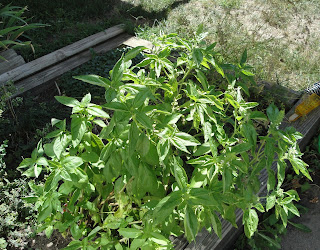 Summer weather with rain in June and seasonable heat in July and August produced a great crop of tomatoes and herbs. I've harvested chives, basil, oregano, sage, oregano, and lavender from the bed of herbs next to the house. Parsley, a biennial crop, was sparse and went to seed early. I was going to cut it back but found a monarch caterpillar feeding on a stem. I left the scraggly plant alone because drought and decreased habitat have created hard times for butterflies. I hope the parsley will reseed itself. Three weeks ago I noticed honey bees in the oregano. Again, instead of cutting off the flowers of the plant, I let them grow. I have plenty of oregano but have seen only a honeybee or two in my yard for a number of years. I am happy to leave the oregano flowers for them. 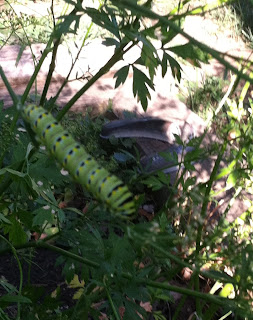 Earlier in the month, I tried to give excess cucumbers to the neighbors and no one would take them so they went into the compost. Currently basil and tomatoes are delicious and plentiful. I gave tomatoes to my daughter and my sister. Today more tomatoes ripen in front of a window in the basement and wait on the kitchen counter for eating and sharing. Yesterday, on one of the hottest days in August, I canned tomatoes. While I know adding humidity and heat to the kitchen increases my energy consumption, tomatoes do not wait for a change in weather. Besides my locally grown pesticide free tomatoes taste much better than any trucked in to a grocery store. As a good friend of mine once said, "Come December, opening a jar of home canned tomatoes is a little taste of summer."

As I worked yesterday, I thought about the way my great grandmother preserved food for her family. Charlotte lived her adult life on a farm in south central Nebraska where she and her husband reared nine children. In the early 1900's, gardening helped feed her family. If her garden and fruit trees didn't produce, they had less to eat. When she canned, Charlotte and her daughters pumped water and built a fire in a large cookstove. Ventilation consisted of opening a window or stepping outside into the hot Nebraska wind. When they finished preserving fruit and vegetables from the garden, they pumped and heated more water for scrubbing pots and pans. Then, instead of ordering a take out meal because she was too tired to cook, she prepared, served an evening meal for her family. Then her daughters pumped and heated more water to wash more dishes.

My aunt recalled Great Grandmother Charlotte kept a beautiful garden until the day she died. She loved to be outdoors and enjoyed growing fruit, vegetables, and flowers. No doubt, the flowers fed her soul while the other produce fed her family. I'm sure neither her vegetable garden nor flower bed ever looked as messy as mine do right now. Weeds, tomato vines, and tall zinnias mingle together. When I go out to harvest tomatoes I can barely reach the red orange fruit in the middle of the garden plot. I made some garden notes for next year which include better spacing for tomatoes and a much smaller bed of perennial flowers. In the meantime I've plenty of tomatoes and basil and I can get other ingredients at the local grocery store and farmer's market. In spite of my out of control garden, life is very good. 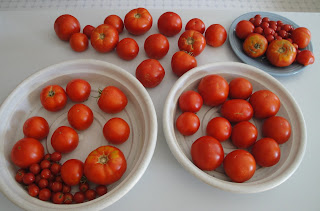