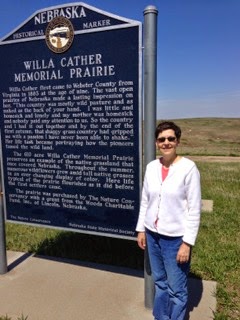 My sister and I enjoy the work of Willa Cather. Several of her best known novels are set on the Nebraska prairie. In 1923, she won the Pulitzer Prize for One of Ours, a novel about a young man from Nebraska who finds himself in France during World War One. Recently we took a little road trip to visit the Willa Cather Memorial Prairie and Red Cloud, Nebraska, the small town close to the Nebraska/ Kansas border where Cather spent much of her childhood.

We stayed at the Kaley House, a bed and breakfast in Red Cloud. The gracious old home has been lovingly restored by the Innkeeper and her brother. It was comfortable, immaculately clean, and beautifully furnished with antiques. It also had all the modern amenities we seem to think we need these days. After checking in, we toured the Willa Cather Foundation office/store/gallery, Cather's childhood home, the Red Cloud Opera House, and the bank/museum that was the setting for A Lost Lady.  Later we walked past several other buildings associated with the Cather family. 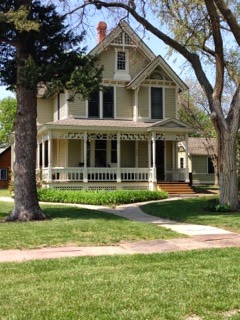 The next day, we drove out to The Willa Cather Memorial Prairie south of Red Cloud. The Prairie, preserved and restored by the Nature Conservancy and The Nebraska Environmental Trust, is currently maintained by the Willa Cather Foundation. It is located up on the "Divide," a plateau of rolling prairie. We spent several hours on a beautiful April morning walking the trails. The prairie grasses were mostly green and we saw a few wildflowers scattered here and there. As we walked a swallow flew and dived quite near to us. Perhaps she had a nest nearby and preferred we move on down the trail.

Prairie is defined as an extensive area of flat rolling grassland. In that description, lies the subtle contrast. Although the prairie may look flat from a distance, up close or on foot, gentle swells and dips in the land are apparent. One can dismiss the prairie as boring. I say look more closely. Look for the beauty in subtle greens and browns under a great big bowl of a blue sky or a bank of ominous gray clouds. Listen for the familiar five notes of a meadowlark. They are the same notes that Native Americans knew before European settlers arrived. The prairie is an acquired taste. It doesn't grab your attention like a mountain range, an ocean, or a redwood forest but when the grasses bend with the wind and small prairie flowers bloom, is quite something. The few Spring wildflowers hidden among the grasses speak to the possibilities in well cared for land. 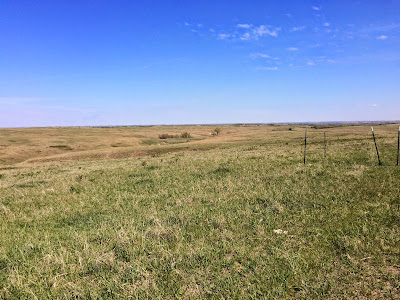