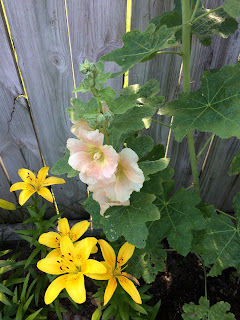 As the nights cool, my garden has that end of the summer look. Despite this earlier photo, most of the beds are none too attractive. The tomato vines are a mess. They are dying back while a few pieces of green fruit dangle from dry branches. I planted them two weeks later than usual because of heavy May rains. More rain fell in June so they had a slow start. I'm not complaining about the moisture but I am glad I don't depend on my garden to feed my family in the way my great grandmother. I have harvested some tomatoes but will not have enough to can for winter soups. However, the cucumbers thrived in the cooler damp weather. I made plenty of bread and butter pickles and gave away as many cucumbers as I could find willing takers. I'm pulling up the last wilting cucumber vine today. I also made a gardening note to plant only one hill of cucumbers. How many pickles can one family and neighborhood eat? For the first time, I had good luck with a bell pepper plant. We have been eating "orange blaze" peppers in salads and with hummus. Yesterday I chopped up three extras and put them in the freezer. I also have lush basil plants and will freeze some pesto. My slightly haphazard approach to composting seems to be working. I added a fair amount to the vegetable garden, herbs, and perennial flowers along the fence.

The hollyhocks were beautiful before some sort of blight grew on the underside of the leaves. I usually let them go to seed but this year I cut most of them down hoping to minimize the spread of whatever was growing on them. I don't use gardening chemicals or even natural/homemade sprays. I've never found anything that worked very well or seemed worth the time to mix and spray. If a flower, vegetable, or herb grows and thrives I keep it around, if it doesn't I let it go. The perennials in my garden have to tolerate the Nebraska summers and winters. 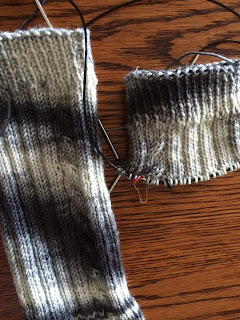 In knitting notes, I am chugging away on the second gray variegated sock. The single cable running down the side adds just enough interest to keep the project interesting without requiring too much concentration. The cable on the right sock twists to the front and the one on the left sock twists to the back. This thoughtful detail of a mirrored cable on a free pattern is typical of meticulous detail by the designer, Glenna C. I have an Ishbel shawl on the needles - in blue of course. Late last night I picked it up and discovered a few rows back, I had began to knit two edge stitches instead of three. I decided to wait to fix it in the light of day. I'm going to try to drop down and reknit the stitches instead of ripping out six to eight rows. Wish me luck. I am looking forward to cooler temperatures and a chance to wear a shawl. I hope the end of summer is treating you well. 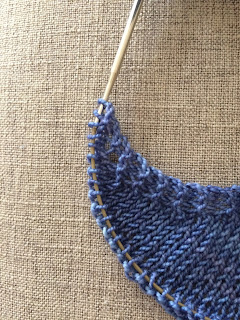