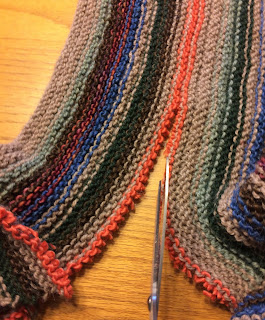 Yesterday I walked a bit in mist and the brown landscape. Our area has not received much snow so walking is easier but I miss the peaceful quiet of a snowy January. I came home from my walk resolved to fix a color mistake in this scrap afghan. Last winter I began this project with oatmeal colored yarn that never became a sweater and added some coordinating colors. I set the afghan aside when it was too warm to knit with a lap full of wool. Late this autumn, I pulled out the basket of yarn hoping to knit a color repeat four or five times a week. Last month, the project stalled. I knit on, ignoring the small voice in my head telling me to reconsider the orange. Instead I kept knitting, thinking the other colors would eventually balance the garish orange.

Yesterday I took a deep breath and decided to cut out the orange. The worst that could have happened was that I would have to re-knit all the rows above the stripe. It's all knitting right? I cut carefully on the wrong side and pulled out the pieces of orange. Then I put the pieces back on smaller sized needles to avoid pulling out live stitches and kitchenered the afghan together. The invisible weave is between the second and third oatmeal stripe. I'll be picking up orange fuzz for a few more days but I got the project back together. I cut my knitting and I survived. Imagine. 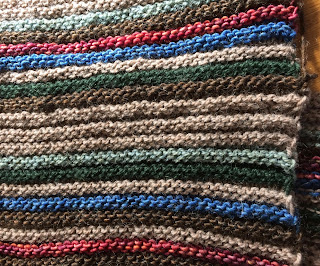 After four or so false starts, I cast on a Schoonheid Shawl. I'm adding a seed stitch border on both sides to prevent rolling. The yarn has been in my stash for two years. I decided to knit with it instead of saving it forever. Imagine.

I've been thinking about a word/theme to carry into the new year. This year my word is "Imagine." I like the idea of thinking, creating, and forming an idea in my mind. Related words like imagination and image are also intriguing. An image can be a portrait, a figure, representation, or a reflection. Imagine and simulate have related word origins. Isn't it interesting that to simulate means to imitate something and imagine means to form a mental image? To use part of a well worn quote by Arthur Ward, "If you can imagine it, you can achieve it." Imagine the creative solutions we can devise in 2017. Happy New Year. 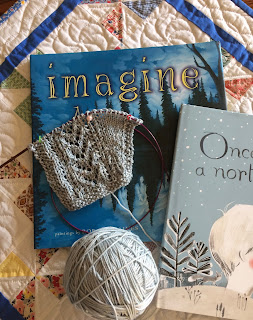