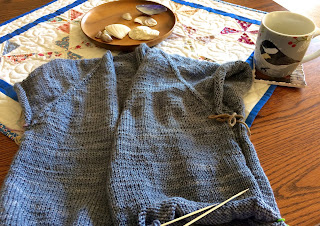 Even as the weather swings from warm to windy to rain to snow, spring is around the closet corner. Yesterday the wind blew a gale. The sandhill cranes arrive along the Platte River. This is March in Nebraska.

In knitting news, I cast on two pair of socks, one vanilla pair for take along/social knitting and another called Sunday Morning Socks. I purchased the pattern last December during the Indie Gift Along sale on Ravelry. I am enjoying knitting on the Travel Cardigan. I finally found the rhythm between the yarn and needles. More often than not, staying with a project makes that happen, at least for me. 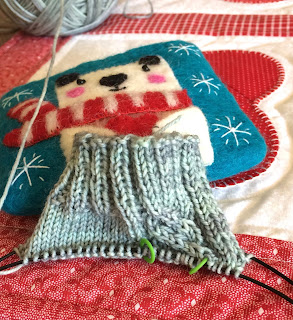 A few weeks ago on a cold day, I was out walking and found a robin's wing. The beautiful wing was just as it had lain on the bird's body. I saw no other tissue, blood, or feathers in the area. The gray top feathers lay in a cross wise pattern with less than an 1/8 inch of space between them. Both space and feathers insulate a bird from cold and heat. They also allow air to flow through and lift it in flight. Elegant shape and construction protect a bird and allow it freedom. Only this time, neither had been enough.

I pulled a tissue from my pocket and used it to turn the wing over. An outer rim of rust colored down was visible on the underside of the wing. The bone had snapped off cleanly, leaving only a faint hint of blood in the joint. Using the tissue, I picked up the wing with my mittened hand to carry it home. I wanted to look more closely and perhaps save a feather or two. I held the tissue-wrapped wing gently. Several times I looked to make sure it was still in my hand. At home I stooped to lay the wing on my porch in order to unlock the front door. Somewhere, the wing had slipped from my hand and I held only the tissue.

I retraced the last block of my walk. Not finding the wing, I returned home. I never saw it again. Maybe it decomposed in the grass or was picked apart to line a nest. Maybe some drop of fluid in the joint, a bit of bone morrow, or even a morsel of flesh under the rust down sustained a small animal. I hope the wing became part of the natural order of the earth.

As I prepared our evening meal, I glanced out the window to see five or six robins sitting in a tree. Robins winter here so seeing one or two in February is not unusual. Flocks are more common later in March. I nodded to the robins and wished them a safe evening. Then I watched one of the last sunsets of the season.