Early this morning I watched light come into the sky. The sun is visible from a slightly different point on the horizon than it was a month ago. The quality of light has also shifted. The early birds to the tube feeder were gold finches, with the sun on their gray/green breasts. Geese flew over the house. I recognized their calls before they came into view. No doubt they belong to the urban wild fowl that circulates among city ponds and creeks. They were not migrating sandhill cranes or snow geese but I am waiting for those ancient cries. 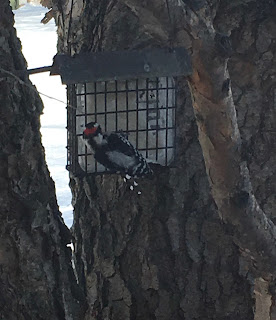 Mornings at my desk, I watch the little birds at the seed and suet feeders. The last two weeks I've been watching this Downy Woodpecker. I know it is the same bird because the little black feather with white polka dots hangs askew from his back. Though the days are growing longer, February doesn't seem like a good time for molting. The feather blowing in the breeze reminds me of a loose tooth in the mouth of a seven year old. The bird just doesn't use a tongue or finger to worry the feather away.

I knit a hat and mittens for a child who needs them to keep warm. Some children don't have a Grammy to knit for them so occasionally I take up my needles to help out. Last night I worked on the first sleeve of the color block sweater. It is still a blob of gray and light blue, a little like a late winter sky. 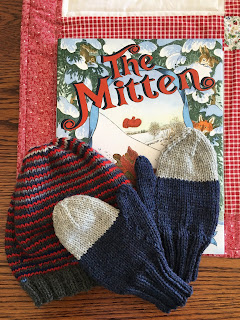 Tomorrow is my Dad's birthday. He passed away seven years ago. Dad was strong willed and not the easiest guy to love. Alcohol was a demon in his life. However in the days before Driver's Education, he taught me how to drive. The first time I drove for my license, he stood on the curb waiting for my return to the county courthouse. He shook his head as I scraped his Pontiac against the bumper of a patrol car while pulling into a parking place. He didn't scold but remarked, "we need to practice parking." The following Sunday afternoon, we pulled in and out of parking spaces all over town. I passed the second driving test. Many evenings he came home from work complaining about lights on all over the house. "Turn off the lights. Money doesn't grow on trees." He took me down to the Norfolk Savings and Loan to open a savings account based on earnings from babysitting and my quarter a week allowance. After watching his widowed mother struggle to make ends meet, he helped both his daughters and sons obtain college educations. He loved pastries and the smell of birthday candles burning on a frosted cake. He was fond of his grandchildren. After Mom died, he learned how to wash a load of towels and make a pot of coffee. When I drove to see him in the nursing home, he thanked me for coming and shooed me out mid afternoon saying, "you need to be home before dark." As long as he was able, he stood and walked me to the door of his room. I plan to bake a sweet treat this weekend to remember him.

I hope your weekend is filled with the goodness of small things.