Now we settle into winter. Sunday, on a cold short walk, I noticed a tree with slight nodules that presage spring buds. What a wonder for a January day. Darkness draws us indoors while the days gain minutes of daylight. Yesterday, snow fell on snow. I can't remember the last time that happened in Lincoln. Snowfall shushed our comings and goings. I sorted through photographs for a photo book for Jonah. Now that he is three, I have a gallery from which to choose. I've only just begun that process.


I also knitted on this shawl and listened to The Murder of Mary Russell. Laurie King spins stories of Sherlock Holmes married in later life to an American, Mary Russell. Russell, a scholar, is front and center in the detective work. She often has her nose in a book and sometimes takes refuge in a manor house library. This book tells the backstory of Mrs. Hudson who works as Holmes and Russell's housekeeper. For Conan Doyle readers, Clara Hudson was Holmes' former landlady on Baker Street. I can't recall that her character was developed much beyond brewing tea and tidying up after Holmes and Watson. In this story, King draws literary references from Dickens' work and weaves them into the story. A young Clara, a.k.a. Clarissa, and her protege reread several Dickens' stories.


All of this makes me think about rereading books from my shelves. I confess I write notes in the margins and/or bracket appealing words/sentences. Rereading a book, I come on those marks and compare them to what intrigues me a second time. Many times I catch something I missed during the first rapid read of good story. Every now and then I decide a book has outlived its space on the shelf and find it another home.

Last week after Mary Oliver died, I pulled several of her books off my shelf and read from them. These I have read more than once. Pages are loose in House of Light. Although Oliver is known for wonderful accessible poetry, her prose is just as lovely and peaceful. Currently, I have Upstream on my nightstand. Winter Hours is my favorite among her prose. In a 2015 On Being interview, Oliver remarked that "a poem is a gift for anybody and everybody." What a gift she gave to those of us who read and reread her work.


I finished my Christmas socks, early for next year. I am ready to cast on the second fingerless mitt. I'll knit the second hand and then do the thumbs one after another, increasing the likelihood they will be the same length. Since I seem to carry around a sock project, I cast on another pair. Although a solid color would better show the texture, the bright blues and greens are just the color for gray days. I don't often participate in the Ravelery knit alongs but the designer, Blue Peninsula is hosting a knit-along. I had this pattern in mind for the next pair so here I go. I will finish when I finish though.


It is Wednesday, the day to see what Kat and the Unravelers are knitting and reading. Stay warm and savor these winter days. 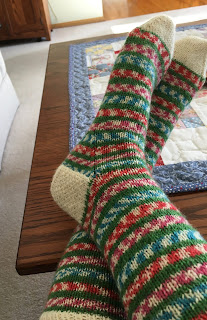