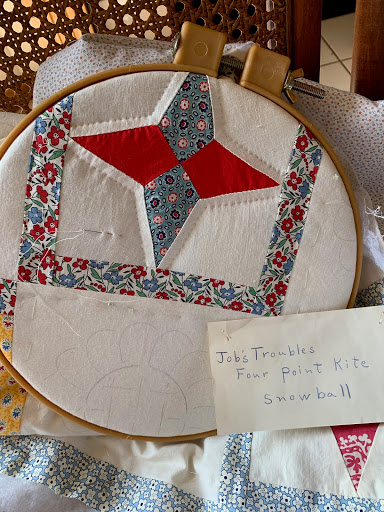 Summer sings another song. Early morning is tolerable for walking but the rest of the day is hot. Little rain has fallen or is in the forecast. The tomatoes roll in from the garden and I will make more sauce this afternoon. I simmer saute'ed onion and garlic, tomatoes, and tomato paste until thickened. Then I funnel it into jars and freeze. When I use the sauce, I season it to suit whatever I am cooking. It's a great base for all kinds of recipes. Currently in our area of the country, canning lids, rings, and jars have disappeared off the grocery shelves. Luckily I bought supplies early in the summer before they became the latest shortage.

One hot afternoon, I went downstairs to my sewing area and pulled out a set of five quilt blocks pieced years ago by a woman I never met. Nine summers ago a former colleague and I met for an ice tea. She was not a needleworker and needed a home for a collection of hand pieced quilt blocks. Before the days of quilt magazines, books, patterns, and shops, women pieced individual blocks to remember patterns. Her mother pieced blocks and then wrote the name of the pattern on a 3 x 5 piece of paper and stapled it to each block. This woman had also pieced and quilted bed sized quilts for her family so my friend was not without her mother's handwork. The quilter was born in 1908 and grew up in southeast Nebraska. As evidenced by the neat letters on each card, she was a country school teacher before marrying in 1930.

These five little blocks were the only ones made from the same pattern. I don't know when they were pieced but they have a Depression Era look to them. Some of the muslin background was cut on grain and some was not. The blocks were carefully stitched together with the points meeting precisely in the centers. They were also slightly different in size and not exactly square. I used the technique of sewing border strips on the blocks in order to square them to the same size. After trimming squares, the width of border strips vary. The eye, in optical illusion, is mostly drawn to the pattern and ignores the small differences. Although I am sure the differences might bother some precise quilter, I think they are part of the charm of an old quilt. I set the quilt together with unbleached muslin and marked traditional quilting patterns with soft pencil. 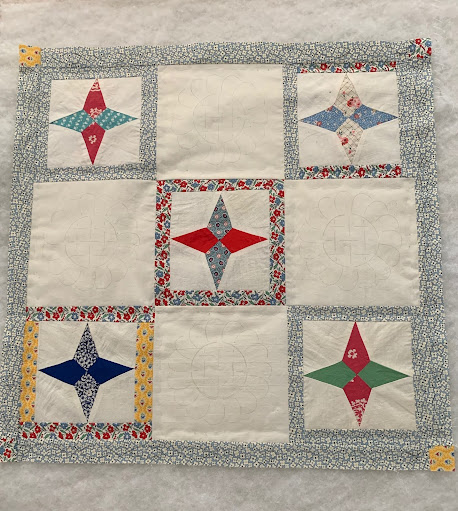 Now I am hand quilting the piece. I enjoy scraps of all kinds - fabric, yarn, quilt blocks, and stories. Hand quilting with a short fine needle casts a spell like no other and reminds me of another woman's story.

As I read The Warmth of Other Suns, I am also thinking about the importance of story and the many stories missing from my education and reading. I am a little late to this party so echo comments of others. This book is nonfiction at its best. It is well written and well organized. Wilkerson crafted a book featuring individual stories that make facts very real and very human. The word story comes from the Latin "historie" which came from a Greek word "histor" meaning to know. Story, I believe, has the power to change us. Why else would books be banned and writers censored and persecuted?

I hope this week finds you well and safe with a story of your own. I really will link this post with Kat and the Unravelers. I'm not sure what happened last week but I am sure it was my error.  One last note, I turned on comment moderation as I've had some spam. I will try to post them in a timely manner, that is if the tomatoes don't take over my kitchen.