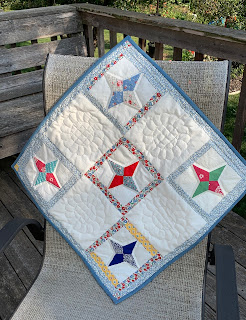 Each month, Honore' invites us to reflect on the word we chose in January. I chose tender. This week I completed this little quilt made from blocks sewed by a woman I never knew, a woman who taught in a one room school house and quietly lived her life. In 1930 she married and left teaching to raise a son and a daughter. I don't know for sure but I imagine once she married she could no longer teach school in rural Nebraska. I knew her daughter professionally at work but we were not close friends. She had no reason so share her mother's work with me other than she knew I enjoyed making quilts. When she gave the blocks to me, I hope I told her that I  understood the work her mother put into her handwork and organization of quilt patterns. This colleague befriended me with her gift.

A long time ago I read this article describing a 2002 UCLA study about women and friendship. Through the wonder of the internet, I found it again. Researchers discovered that in addition to the "fight or flight" response to stress, women also release oxytocin. This hormone encourages women to tend children and gather with other women. When women engage in this "tend and befriend" response, studies suggest more ocytocin is released further countering stress.

As I stitched the binding to the edges of the quilt, I thought about Ruth Bader Ginsburg and her work on behalf of women. I thought about her remarkable intellect and her extraordinary but tender courage. When we tend and befriend each other, a world of possibility opens up. 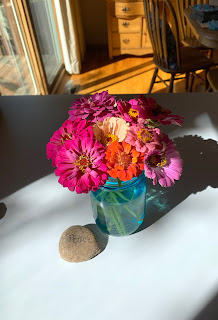