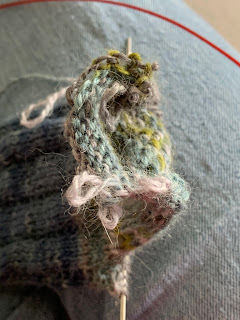 Today the Nebraska sky is bright blue. Yesterday winter treated us to magical hoarfrost that lasted until early afternoon. Frost dusted my shoulders as I walked. This morning the cardinals flash against the bright sky. A blue jay suns himself at the tiptop of a tall locust tree while a little downy woodpecker inches her way up the birch. I will be taking a long walk today because tomorrow winter means business. Snow will be followed by bitter cold.

A few days ago, I was knitting along on the scrappy theoretical socks (appropriately named by Bonny in last week's comments) while I previewed a yoga video. I am participating in Yoga with Adriene's 30 day Breath journey. Since I have been away from in-person classes for several years and have a history of shoulder and back injury, I modify some of the work. Occasionally, based on information in the email with the download, I preview parts of a session.

At any rate, I thought I could finish a few rows of a heel flap, turn a heel, and pick up gusset stitches while previewing a session. Mind you, I have knit this variation of the Vanilla Latte sock umpteen times. I have knit it in an airport, on a plane, in a medical waiting room, in a coffee shop, while chatting with other women in person, and attending church on Zoom. About halfway through the heel flap, I dropped a stitch. While turning the heel, I dropped a second stitch. I noticed neither of them while fast forwarding and restarting the video. The heel looked to be centered on the needles so instead of counting the stitches or inspecting my work, I kept knitting. I picked up one side of the gusset, knit the instep, and then picked up stitches for the second gusset. Just when I had all the stitches on the needles and was rearranging them to knit the gusset decreases, I noticed a missing column of stitches.

I shifted stitches around (on circs) in order to ladder the heel turn stitch back up into place. At that point I somehow twisted a row of stitches between needles and wrapped the cables around each other. Don't ask me how it happened because I couldn't tell you. I should have taken another photo but I thought if I put down the sock to find my phone, it might spring into a worse mess. In hindsight, that isn't likely but I wasn't taking any chances. Then I noticed the missing heel flap stitch and burst out laughing. My husband walked by and asked what was so funny. When I told him, my knitting was in eagle pose, he shook his head. I think this was a moment only a knitter could appreciate. At that point, I turned off the video, pulled the sock off both needles and frogged back to the errant row of the heel flap. I sorted out stitches and needles and reknit the heel. The theoretical sock is safely back on the needles with a proper heel. I am fairly certain I have enough yarn for a pair of socks. If the sock engages in down dog pose, I might be in for a game of yarn chicken. 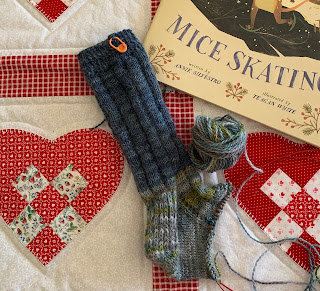 I am chugging down the body of my Winter Forager. It goes much better with yoga and is warm knitting on a winter evening. I like the color of the yarn but the deep purple doesn't photograph accurately. 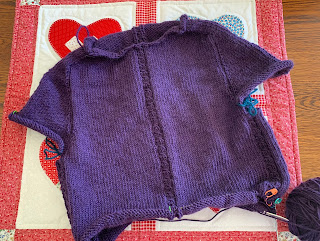 I listened to Helen MacDonald read Vesper Flights, a collection of essays about the natural world. The author read her own work and I enjoyed hearing her voice. The essays are intriguing. Some of her metaphors and reflections are different than mine but I like being nudged toward a different perspective.

Currently I am listening to The Vanishing Half by Brit Bennet. The narrator is excellent and the story is well told. Sometimes during the day, I think about the characters which for me is a mark of good fiction. The novel is a thought provoking comment on racism and the choices forced and influenced by racial injustice.

As I link with Kat and the Unravelers, I wish you all warmth and wellness. May your knitting needles and stitches avoid yoga poses. 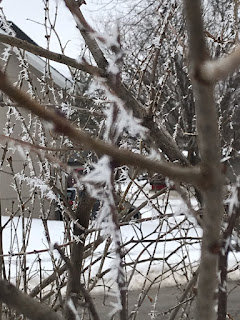