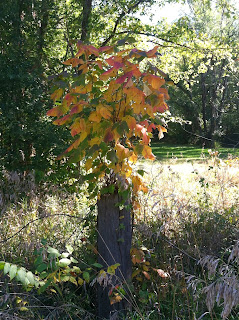 This year, Thanksgiving marks the end of a glorious autumn. Perhaps because southeast Nebraska had adequate rainfall in May and June and fewer 100 degree days, the fall colors were gorgeous. In October I took several walks in a wooded park.  Although the area is different from the evergreens and forests of north central Minnesota and Wisconsin or the Rocky Mountains, these woods, with oak, elm, and hackberry trees, have a rustic beauty of their own.

Early in October, I examined the last chicory blossoms which I have long admired while driving on highways. One quiet afternoon, I stood still and identified a flicker, a downy woodpecker, and several red-bellied woodpeckers hopping up and down large trunks. I still wonder how birds, without binocular vision, dart through a wooded area without flying into trees.  I finally understood how purple can be an autumn color and wondered if I could find yarn in a similar color.  At the end of the month, I savored the smell of decaying leaves and the last golden light of October. 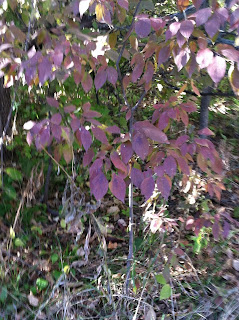 My favorite walk was the one I took with my daughter and grandsons. The three year old was exuberant with his discoveries. When we came upon a downed tree, he explored the hollow trunk and thought hard about what kind of animal might shelter inside. After he bent over to study a fuzzy caterpillar, he watched it "go home to its mama" and chose a broken stick for a treasure. He eagerly walked to the next bend in the woods looking for a deer but was happy to find a milkweed pod. We paused on the trail while he worried it might sting. After we assured him it was a plant not an insect, he worked up the courage to touch the rough exterior of the pod and laughed as the soft fluff and seed grazed his hand. The baby slept in a front pack carrier on his mother's chest. He woke up as we were returning to the car so she took him out and held him so he could see the afternoon light coming through the trees.

Now, it is late November. I will miss the scarlet and butterscotch leaves of this glorious autumn. Something in the west wind tells me it is time to draw in, grind up cranberries, roast a turkey breast, and wrap up in wool. The first dusting of snow fell last week and my grandson called to ask if I liked to go sledding. Echoing one of his favorite responses I replied, "Sounds fun." As some wise person (whose name I can't remember) said, "Thanksgiving is about what you have." I am so thankful for all that I have and wish the same for you. Happy Thanksgiving. 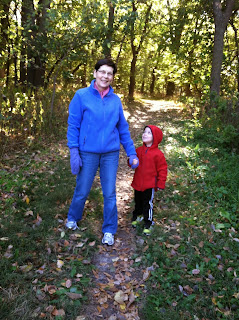