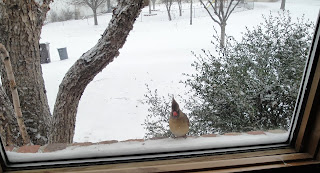 All morning a fine dry powder of January snow has blown across my window.  The forecast is for one to two inches but I wonder if more will accumulate. On the Great Plains, moisture is good and snow insulates the perennial flowers and bushes. Snow also cleans up the landscape and speaks to me of fresh starts. What could be better on a New Year's Day?

A few days ago, I sprinkled seed on the brick ledge outside the window in order to feed the birds and observe them closely. When I pulled up the blinds this morning two female cardinals and a junco huddled on the ledge pecking at the seed. Soon they were joined by three male cardinals flying back and forth from the nearby birch. Tiny pieces of ice encrusted the mask of an older male. One of the females had a piece of ice at the hinge of her beak. They all differed in coloring and build. The slightest and youngest male was the most aggressive, flying at any other bird who tried to join him on the ledge. The other two males commanded the best spaces on the ledge by turning their heads quickly back and forth. The female cardinals were aware but unconcerned with the presence of other birds. Now and then a pair of nervous chickadees flitted in for a quick treat before darting down into the bushes in front of the house. Snow highlighted the remarkable patterns of the sparrows' markings. One sported a bib of closely spaced charcoal dots while another had a white line around his neck, much like a turtleneck shirt keeping him warm. Little flakes of snow clung to the beaks of the juncos. Sparrows, juncos, and finches fed in groups gaining warmth from each other and reminding me that sharing a meal is an age-old way to connect with others.

My personal New Year's Day parade ended late morning leaving me time to consider my own New Year. Rather than make resolutions for 2014, I plan to "Begin as I mean to go on." (Quote from Charles H. Spurgeon, courtesy of Wikipedia) Yesterday I put away the Christmas decorations and straightened the living room and dining area so the house is in relatively good order. Spotless, I have decided, is not necessary. On the eve of the New Year,  Lance and I shared a meal with another couple. We came home early so I made a cup of tea and opened a new book. Lance wrapped up in the afghan I finished earlier in the week.  The afghan was a two winter project knit from a basket of leftover yarns which only goes to show I don't always need new skeins of yarn. 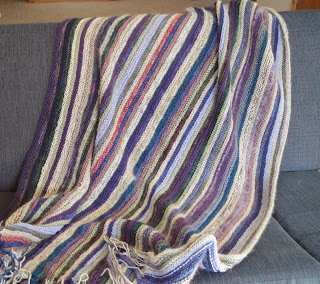 The cardigan from last Spring is still in progress but I need a small portable project. Today seems like a good day for mittens so after lunch I'm going to find a pattern for some yarn I bought at a sale last week. I will also record birthdays and anniversaries in my 2014 calendar.  Late this afternoon I am making a simple meal of tabbouleh salad and baked chicken because simple sounds good after the holidays. If the wind dies down, I might take a walk in the fresh snow and enjoy the quiet of this winter day. And so I begin 2014 as I mean to go on. I hope you are all warm and looking forward to the New Year. 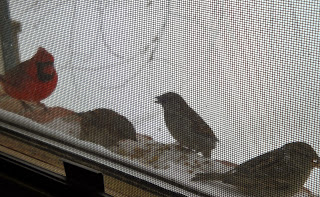