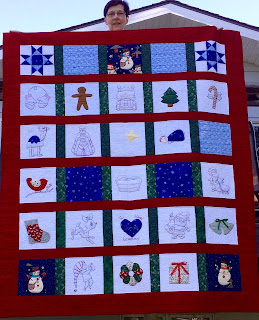 When my children were young, I made them each a Christmas Quilt. When they had children of their own, I gave the quilts to them. Austin now has Aaron's quilt and Emmett has Kate's quilt. Emmett loves "his" quilt and was not inclined to share it with his younger brother, Micah. Honestly, I didn't think he should have to share so I made a quilt for Micah. A week or so after I finished Micah's quilt, my daughter and son-in-law announced they were having another child. First I knit Jonah a Christmas stocking, then I began his quilt. 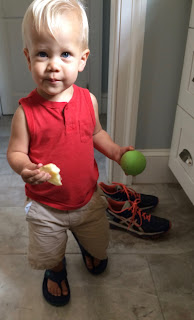 Jonah's quilt contains many of the same motifs as his brothers but unlike the others, I set the blocks together with sashing. After arranging them, I merrily cut and sewed the green vertical pieces to blocks, forgetting to square up the blocks. I fudged and fumed as I ripped out long and short seams. Eventually I lined up the blocks as best as I could and sewed the top together. My excuse is that I was sewing while taking antibiotics. Or maybe I'm just getting forgetful. It's a good thing I love these little guys like crazy. 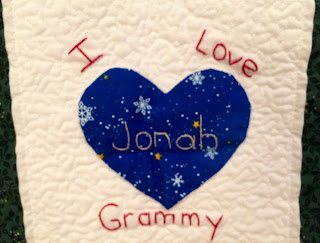 I had the top machine quilted by a local woman. Her work is meticulous and she is really a quilting artist. She matches thread color to compliment each motif and piece. She combines stippling and designs in a way that makes a quilt sing. On this quilt, the red border is quilted with red Christmas trees. She quilted around each tiny snowflake in the plain bright blue fabric blocks. On the light blue fabric blocks she quilted a large snowflake. She also saved the angel by quilting a wing that I had forgotten. 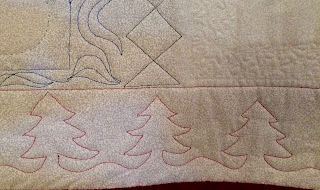 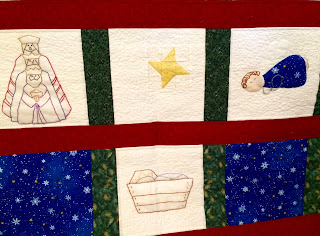 Each Christmas quilt includes something unique for each child. When I made Aaron's quilt, he requested "stars that twinkle." Aaron/Austin's quilt is pieced stars with sashing that meets in a small star at the corner of each block. The three brothers have motifs I traced from an old coloring book. Kate/Emmett's quilt has a boy and a girl hanging up their stockings. Both Kate and Aaron's quilts have a poem/message written to them. Micah's quilt has an extra lamb as he has a beloved 'baa baa." Jonah won the snow and snowman lottery for winters in the northeast. The quilts are set together differently.  Each quilt contains a sprinkle of mistakes topped with a heaping scoop of love. Little Jonah will have a Christmas quilt when he moves out of his crib. Meanwhile, I have to figure out the best way to get this quilt from Nebraska to the East Coast. Perhaps a hand delivery and a hug would be best. 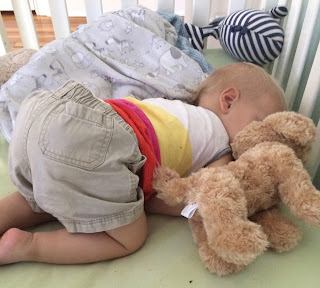 P.S. I realize the quilt photo skims off the top of my head. It was either me or the quilt. I opted to show the quilt.