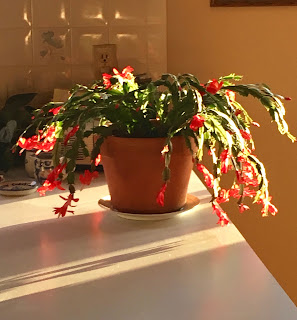 Sun streams in the south windows on this early December day. My Christmas cactus is in full bloom. I am ignoring the empty grocery list although I do have several cookie magazines stacked on the kitchen table. My holiday plan is to choose some simple pleasures to enjoy. Baking cookies to share and getting out a few treasures appeals to me. After mailing packages this week, I'll write a few personal notes to distant family and friends.

The Contrail Shawl is resting in a knitting bag as I knit on a three color cowl. The green yarn was a prize in a Ravelry Knit Along. Although the green isn't a shade I wear, the hand of the yarn is lovely. It has been sitting in a basket next to the leftover pumpkin colored yarn. As I looked at them, I thought about the Three Color Cashmere Cowl. I got out the leftover blue yarn but it is heavier than the other two. Can you see where this is going? Off I went to a local yarn shop looking for a third color in the same brand as the green. I came home with a skein of yellow. This reminds me of the  If You Give a Mouse a Cookie series by Laura Numeroff. If you give a knitter a skein of yarn, she'll want to buy another. I have no idea what I will do with this cowl but it is fun to knit. Since I don't like great big cowls, I shortened up the pattern sections. I had a dickens of a time creating jogless stripes. I tried two different techniques that work well with wider stripes but the joins in these two row stripes are wonky. Someone will have to wear the cowl with the joins at the back of their neck. 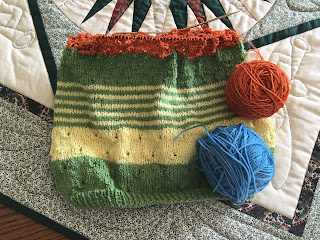 In other news, Micah, our four year old grandson, decided he wants to wear a different hat each day. This is a little guy who doesn't like tags in shirts, zippers in sweatshirts, or pockets on pants. He would prefer to wear shorts under his snow pants. In his defense, he has very sensitive skin, so his preferences are understandable if a little challenging. His request for hats is something to honor. His mother said, the wilder the colors, the better. So I ordered this skein. I thought a lighter weight hat might be more comfortable for him. I hope his Dad is ok with a little pink. There is some bright orange and green to balance the pinks. I can knit two little boy hats from one skein so there will be one for his younger brother. Micah also has an older brother. I can't send two hats for three boys. If this grandmother knits two hats, she'll likely knit another and chances are she'll need more yarn. 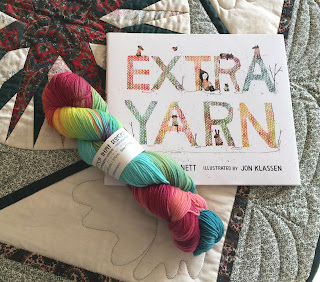