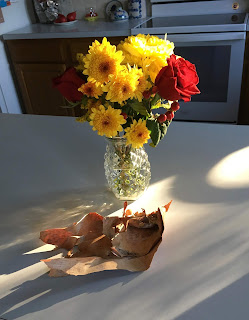 Yesterday this piece of birch bark blew onto the deck. Since it was so lovely, I brought it in for awhile. Today is a day for a tried and true recipe, Butterhorn Rolls, and two new ones, Gingerbread Spiced Almonds and Cranberry Couscous Salad. Then, tomorrow, over the river (the Platte) and through the fields (corn) to my sister's home we go.

As I grew up, my family celebrated Thanksgiving with my Dad's extended family. The tradition began in 1941 with a kindness. After one of my great uncles lost his young wife, my grandmother and her sister invited the widower and four daughters to Thanksgiving dinner. My grandparents had three children. Great Aunt Elizabeth and her husband had three daughters. I think about how uncertain life must have been in November 1941 for all of them, including Uncle Henry.

As the cousins married and the family expanded, they met in various farm homes. Although there was plenty of outdoor play space, I preferred to be underfoot in the kitchen. There I listened to the women chat as they prepared the noon dinner for forty-some family members. At least one cousin was a dairy farmer, so pie was served with plenty of fresh whipped cream. One year when I was a little girl, I skipped the pie and ate a plate of whipped cream. In the early days, my grandmother and her sister would often put their silver heads together laughing and talking in German when they didn't want the children to overhear their conversation.

Later the reunion moved to a community room and we took our children a time or two. At one of the last celebrations, a new daughter-in-law brought Cool Whip. No unkind looks or words were exchanged. However, Ellen, one of Dad's cousins with a big smile and bright eyes, went to her picnic basket, pulled out a hand-held mixer, searched for an electrical outlet, and whipped up real cream. The family gathered on Thanksgiving from 1941 until 2000. The sweetest moment occurred when all the voices, young and old, sang the Doxology. "Praise God from whom all blessings flow" rang throughout the farmhouse or across a big room. I am grateful for the memory of the Thimm family Thanksgivings.

Tomorrow at my sister and brother-in-law's table, the group will include their children and significant others as well as good friends. Out of respect for those of the Jewish faith, we won't sing the Doxology and I will miss those who are not there. Still, as we gather my sister, niece, and I will be shoulder to shoulder in the kitchen. We will celebrate Thanksgiving and our many blessings, including real whipped cream on mocha pecan or pumpkin pie. Personally, I am also adding a dollop to my decaf coffee. 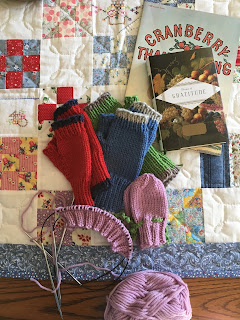 Although I am joining Kat and the Unravelers this Wednesday, knitting feels like an afterthought. I finished all the mitts, including a wee pair for Norah. She needs a hat that doesn't fall down over her face and I need a project for the drive to Omaha tomorrow so I cast on a hat. I have almost finished knitting her Christmas stocking. Friday I plan to take a walk and spend the afternoon pulling out the waste yarn to knit heels. Then after gentle steam blocking, I will weave in a boatload of ends, seam, and line the piece. Meanwhile I have some other yarn waiting on the coffee table for the next project. I've been looking at it and thinking of shawls.

May your Thanksgiving be rich with kindness, dear ones, and your favorite dessert. I am off to stir up dinner rolls. Happy Thanksgiving Eve. 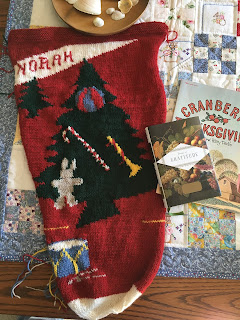