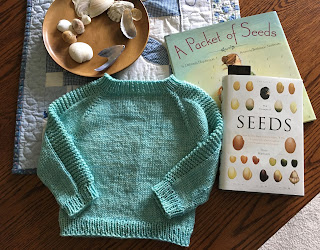 Hello June - I've missed your balmy sunshine, long evenings, and warm days. I haven't missed the weeds that come with abundant rain. Since today promises to be dry I hope to weed the perennial flowers along the fence. Saturday I replanted cucumber and zinnia seeds that were either washed away or eaten by the birds. As I walk, I'm enjoying the splashes of color from flowers in the neighborhood. They reflect the gardener's personality and tell me a little about my neighbors. My pots are planted with a lick and a promise and what is economical from the nursery. When it rains, I'll sew but that is a post for another day. I have supplies for two small projects. 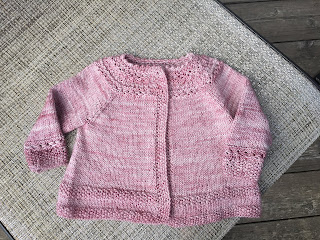 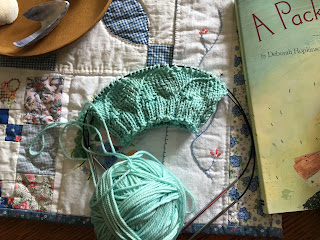 Since finishing these sweaters, I've had a bit of a cast on party. I made one hat for a charity donation and am swatching for a sweater. Last knit I cast on a hat to match Norah's sweater. Sunday I cast on and unraveled the beginning of a lace scarf. Since I had one skein I decided to use it for lace scarf. I meant to choose a project from a knitting book on my shelf but instead flipped through the Up, Down, All-Around Stitch Dictionary (from my shelf!) and chose a few stitch patterns to try. A lace leaf pattern got lost in the tonal variation of the darker color so I began again with the Wave Crest stitch. I'll knit until I get bored, then add garter stitch rows and perhaps pick a different pattern. I am in the mood for casual summer knitting. The yarn is lovely and reminds me of the Connecticut trip when it was purchased. 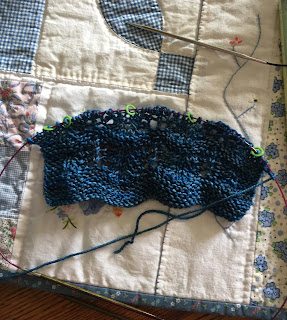 I am reading the book The Triumph of Seeds: How Grains, Nuts, Kernals, Pulses, and Pips Conquered the Plant Kingdom and Shaped Human History by Thor Hanson. The science of seeds is interesting but the historical significance of different varieties is fascinating. The author mentions in the preface he has kept scientific jargon to a minimum. Well maybe. I do appreciate the glossary of terms for reference as I am not a botanist. In contrast and because none of my holds had come in from Overdrive, I listened to an unabridged version of Mary Poppins. I had never read the entire story and found it full of lively nonsense and fun.

I am linking with Kat and the Unravelers and then off to do battle with the weeds before they triumph over the flowers and the rhubarb. Have a good week.
Posted by Jane at 10:31 AM