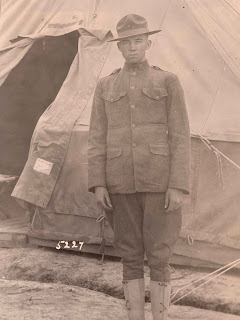 Today is Armistice Day in the United States. On this day in 1918, my grandfather was serving on the western front in France. Although he was too young to be drafted, he volunteered so one of his older brothers could stay home and work the farm with their widowed mother. He began the war as an "engineer" building bridges and moving equipment. By the end of the war, he fought alongside other US service men. In one of his letters he wrote about receiving a knitted helmet, a balaclava worn under the helmet. Late in the spring of 1919 he and his brother arrived home safely although his brother had lung damage from a gas attack. My Granddad was a gentle man in every sense of the word and a wonderful grandfather. I am thinking of him today and the army of knitters and Red Cross volunteers who supported the war but that is another story.

Slow but steady seems to be my knitting pace this past week. The poncho is my comfort knitting. I pull it out in between other projects. I didn't take another photo but I've added more inches. 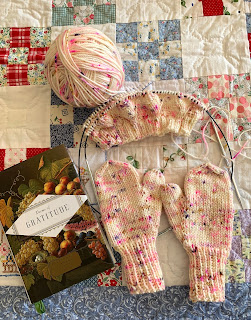 I've made some progress on the latest pair of striped socks. Every time I knit striped socks, I think of my Gram who tossed quite a few sayings into her conversation. I don't know that she ever wore colorful socks but she would exclaim, "Oh my stars and striped stockings." 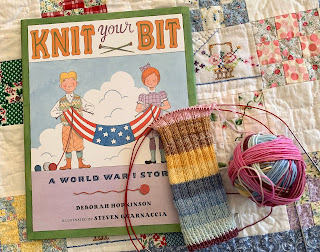 On this Unraveled Wednesday, I link with Kat and other bloggers.  My hope is that on the anniversary of Armistice Day, we begin an era of healing.
Ravelry Links
Norah's Mittens and Hat