Life is quiet as we wind up the holidays and I settle into the peace of January. The local forecast for sleet and snow ushers in evenings of reading, knitting, and hot tea. Some time in December, I decided to reread a few of my favorite books. This week I finished "One of Ours" by Willa Cather. During this second reading, I noticed things, I had forgotten or missed. "One of Ours" is not an action packed, fast moving novel. Instead the story unfolds slowly in Cather's lyric descriptions of the characters and the place, both Nebraska and France. She skillfully ties the settings together with ideas that include native cottonwood trees and wildflowers. Toward the end of the novel, Claude, the main character comes to a realization he has always known, that is, the things in life that are important are not material goods like linen and china  but "the ground and hope . . . the feeling matters." She also writes a beautifully understated relationship between Claude and another soldier, a musician who plays the violin. I find myself thinking about the novel a week later.

I received some books for Christmas including a short volume of the early poetry by Joyce Sutphen, the poet laureate of Minnesota, and Wendall Barry's "Collected and New Sabbath Poems." Both poets write about rural settings. Although I am just beginning to read Barry's book, I love his idea of everyday as holy. At least, that is how I understand his Sabbath poems. My daughter-in-law gave me a used copy of poetry by Emily Dickinson as well as "Great Expectations" by Charles Dickens. The Dickens' book is a wonderful hardback book with lovely old-fashioned illustrations. I last read that story in ninth grade English so I'm wondering what I might discover when I read it for a second time.

Since I have a sore right neck, shoulder, and arm, I decided to learn how to knit socks on two circular needles. An article on body mechanics and positioning for knitters suggested knitting with elbows supported by a pillow while resting the project in the lap. All of this means the knitter's arms are positioned to work at a 90 degree angle. For me, circular needles are more conducive to this position than double pointed needles. The method, with fewer transitions between needles (two instead of three or four) means less tugging and pulling of yarn to avoid the "ladders" that can occur when knitting with double pointed needles. Even though I've been knitting at a more relaxed and slower rate, the socks grow more quickly with the circular needles. A good friend encouraged me to try this method and I am glad I did. I also received some good advice when I purchased new needles from The Yarn Shop, one of my local yarn shops. The pattern, "A Nice Ribbed Sock" by Glenna C.  is one I have used many times. The yarn is Opal, Sweet and Spicy 2 in Cake Pops color way. There is nothing like bright and cheerful colors for January knitting.

I hope you have time to read a good book or knit some socks. Take good care of the arms, wrists, and shoulders though. Happy New Year. 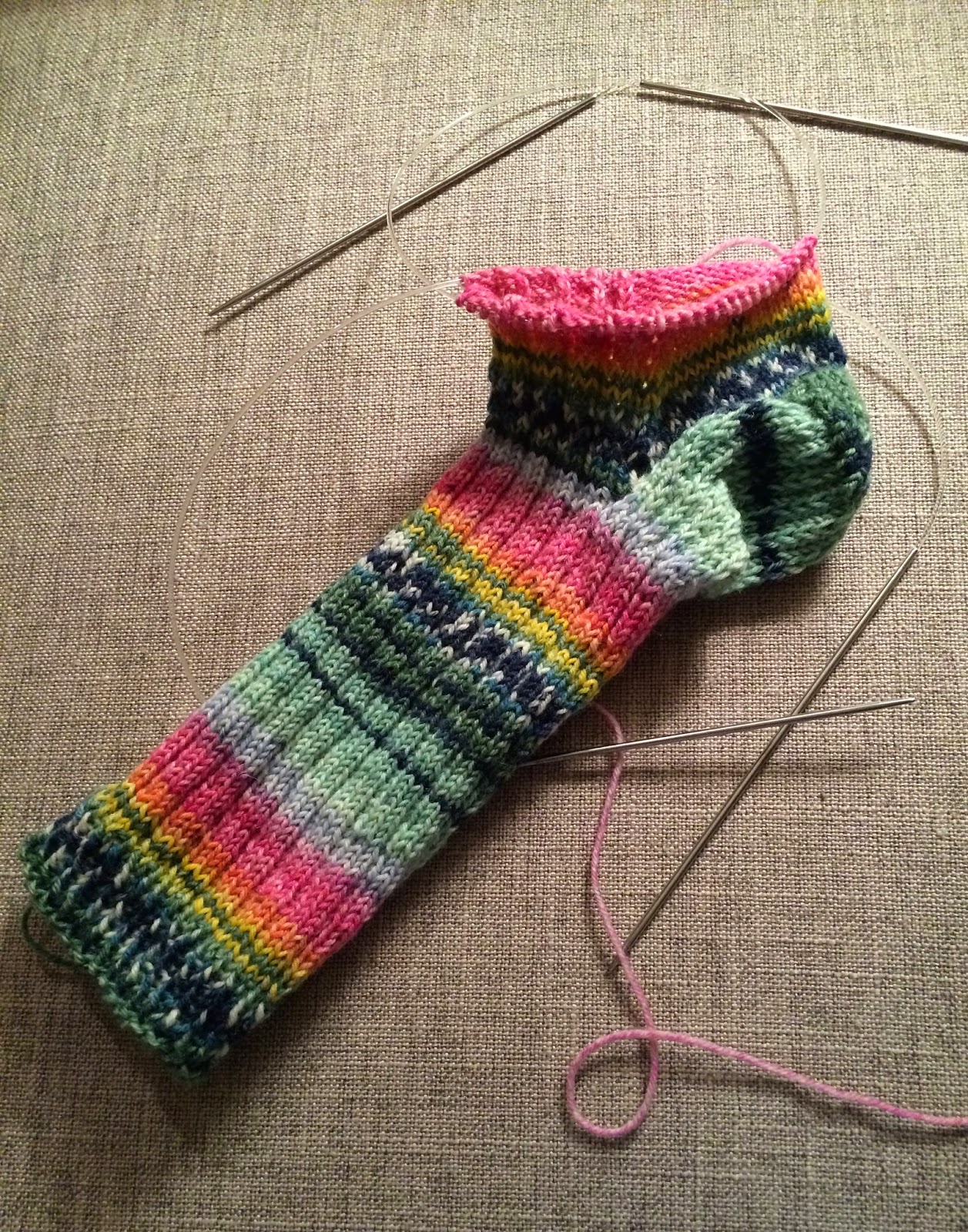